Botanical Designation: Not a distinct species of maple; describes a fungal discoloration caused by wood-boring ambrosia beetles. The majority of ambrosia maple is found in species of soft maple.

Comments: So named for ambrosia fungi, which is found in association with ambrosia beetles. The beetles bore into the trunk of the tree, bringing with them the ambrosia fungi, which subsequently stains and discolors the surrounding wood. The discoloration can be very similar to spalted maple, though with ambrosia maple, the discoloration is centered around the boring paths of the beetles, and their entrance holes can usually be seen. (This also can create a challenge when finishing the wood as these holes usually need to be filled before a final finish is applied.)

Images: Drag the slider up/down to toggle between raw and finished wood. A special thanks to Mike Leigher for providing the wood sample of this wood species. 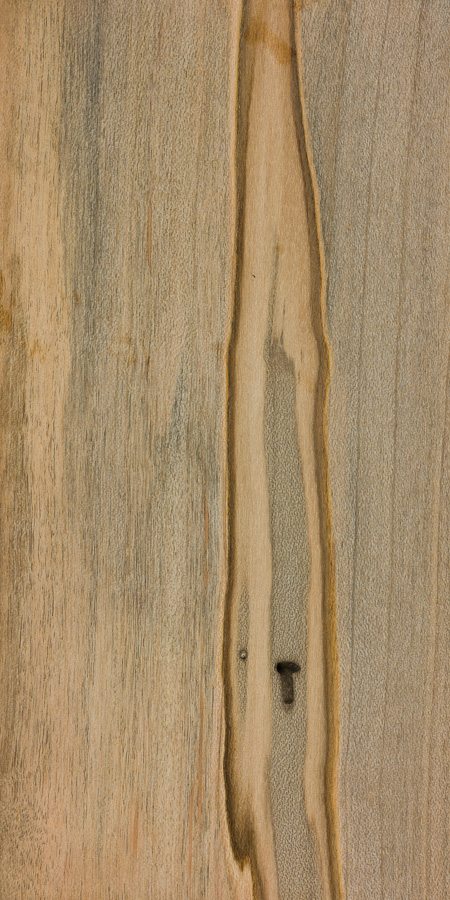 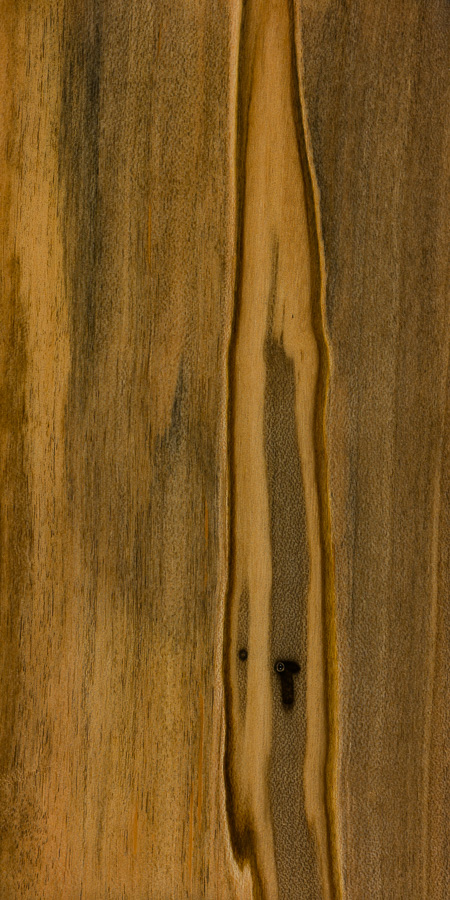 Identification: Since ambrosia maple is not a distinct species, the written information below is for red maple (Acer rubrum), though the endgrain images show a sample with ambrosia staining for reference. See the article on Hardwood Anatomy for definitions of endgrain features.

Lookalikes/Substitutes: Red maple is more or less indistinguishable from other soft maples such as striped maple (Acer pensylvanicum), however, it can usually be separated from hard maple (A. saccharum)according to techniques in this article.

Here is a picture I forgot to upload on my post below. It shows a box I made from maple with both curls and beetle coloring and holes.

I use Ambrosia maple to make beautiful trays and boxes. Occasionally will use it for a cheese/Charcuterie board. Never a cutting board as it is too soft and you lose most of teh the beautiful colored streaks when you use the edge or end grain.
I never fill in the beetle holes, they just add to the overall figuring of the wood which increases the beauty. I feel really lucky when I find a piece of Ambrosia maple that also has a curl to it. Just apply some coats of de-waxed shellac to bring out the beauty of the wood.

This is a kuksa I carved out of a block of ambrosia maple. The wood was very easy to carve as it’s pretty soft. I plugged the inner holes with wood dust and Titebond III, and left the exterior holes unplugged. Finished it with a mix of food grade mineral oil, beexwax, and carnauba wax. I really like how it came out, and the pattern of the ambrosia stains are beautiful.

Thanks for all the great info. I am considering using this for a butcher block counter (which I WILL use as a cutting board). I am concerned about using this in a butcherblock / cutting board re what the glue & filler were for the holes… food grade?

I used wood dust and Titebond III to fill the holes in my kuksa. If I were to do this again, I would probably add a bit of charcoal dust as well to make the filler much darker. But for a butcher/cutting block wouldn’t a harder maple be better suited? While carving my kuksa, it slipped and fell to the ground a number of times, and there was a lot more damage to the Ambrosia maple than what I experience with birdseye maple for example.

I recently found a piece of hardwood with the ambrosia pattern, but it is definitely not maple, ignoring the pattern and looking at the endgrain id say it looks like african walnut.
Could ambrosia beetles infect all dead tree species?
I havnt found any records of ambrosia wood other than maple online

Hello, We had a Maple tree right next to the house that had been dead awhile. We finally got it down and I had a feeling it was unique from the texture on the outer sapwood where the bark had fallen off. I did indeed have some curl and was very infested with the Ambrosia Beetle discoloration.

It’s all cut and drying now. I can’t wait to get it into the woodshop!

I fill the holes with medium CA before I do my final cut. Then sand and finish. It gives the holes the perception that you can stick your finger in them but they are sealed and smooth.

The ambrosia maple sample that I see appears to be beech, as far as I can tell from the picture, and I’ve seen a lot of maple and a lot of beech in the last 41 years

I build mountain dulcimers and ambrosia soft maple is one of my favorite top woods. Most buyers do not want the worm hole covered, I just finish over them with amber shellac and it actually makes them more visible
Bill Robison

Look up S G Art Turning. He is in Canada and has some beautiful pieces, including a couple of sinks. He is very fortunate to have a friend that has land and gives him beautiful wood to turn. Love watching you turners!! 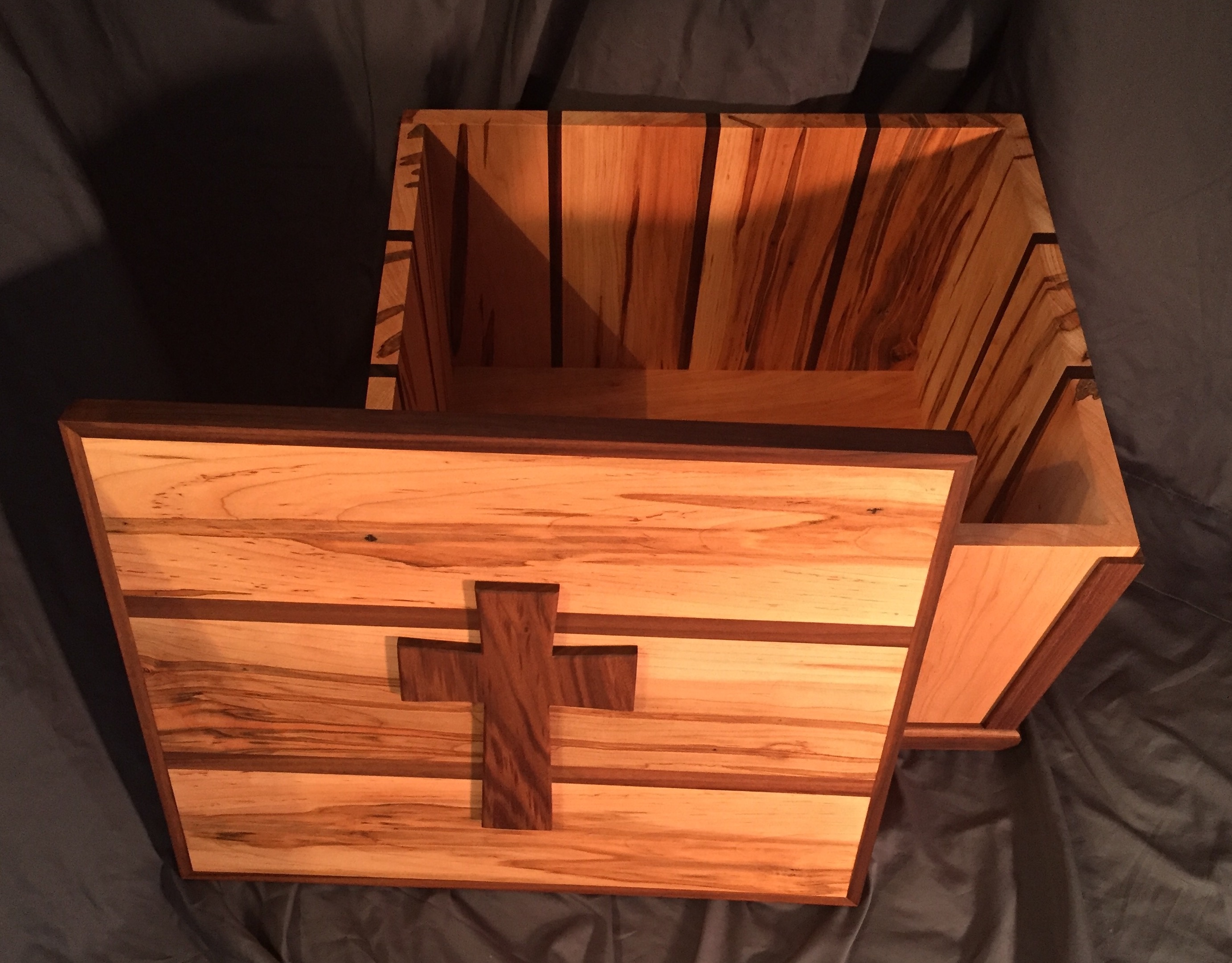 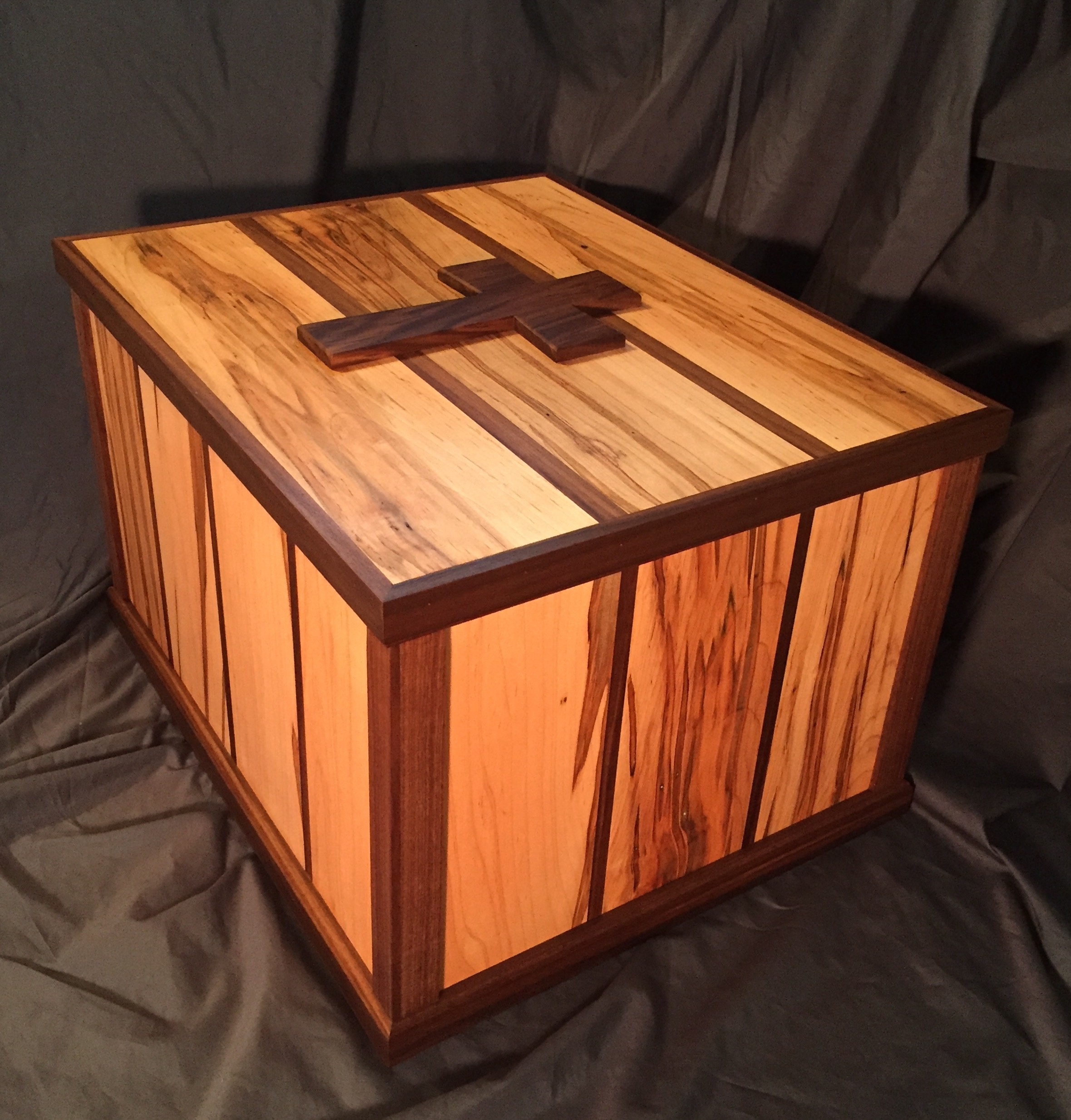 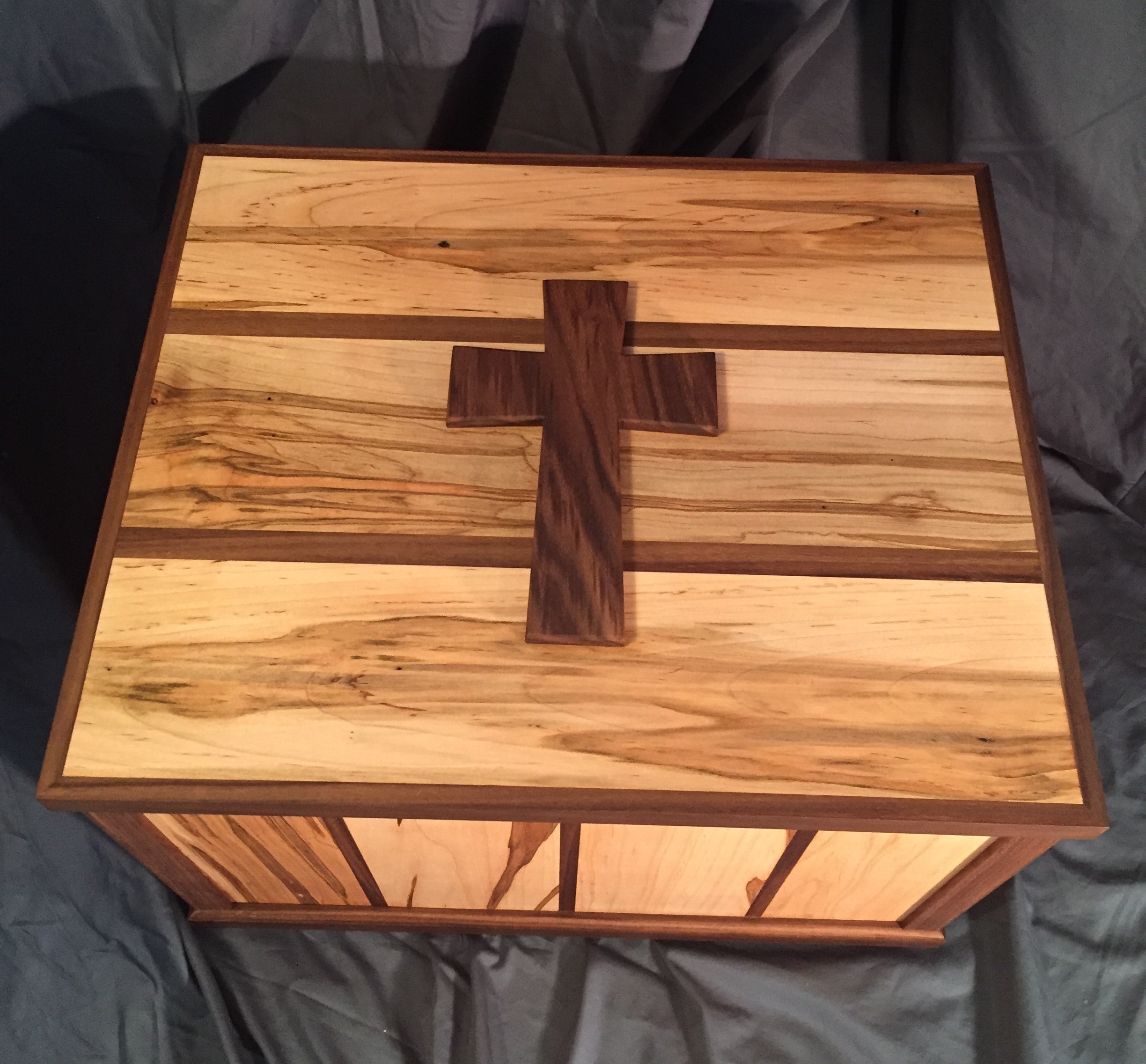 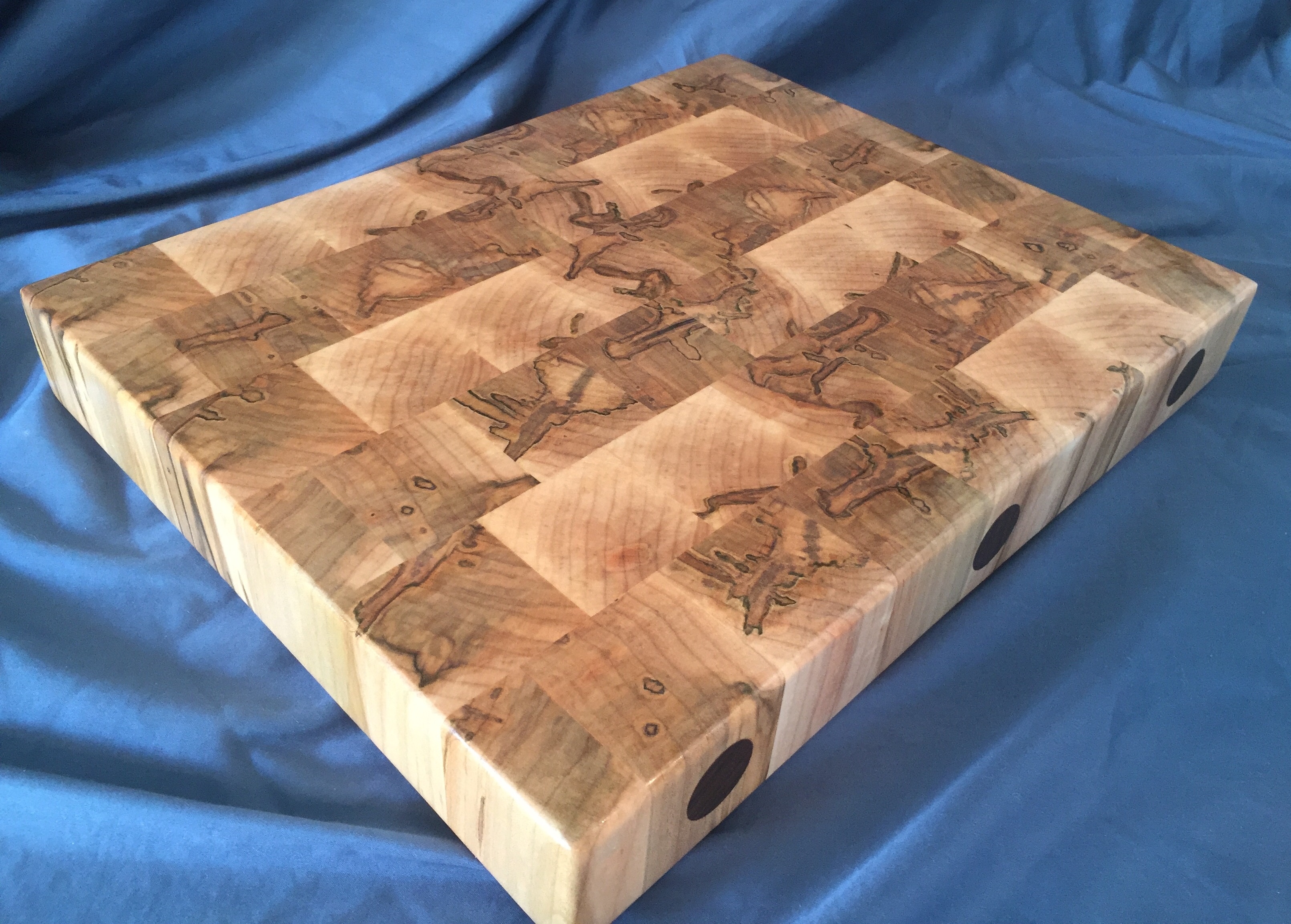 I use Ambrosia Maple for cutting boards, boxes and turnings. I love this material. Attached end grain cutting board and Time Capsule box for church in Indiana

I just got a plank of ambrosia maple with some curly to it. It is really pretty that I will use for a guitar top but it has worm holes. How did you fill in your worm holes? I figure you just need to just keep filling it with lacquer until they fill.

You can use epoxy as well which would probably take less time.

Like the other poster epoxy works but another approach is to rub some saw dust into the holes and put a drop of thin CA (super) glue on it when it is set up sand it lightly and drop a thicker CA glue on it. I have seen luthiers fill knots by putting CA on the knot and rubbing it with sandpaper while wet too but watch out for gluing your finger to the sandpaper. With epoxy you can make a paste from saw dust from the same wood and epoxy then spatula it in then sand and reseal. From… Read more »

There are quite a few holes to be inlaying them all. What most Luthiers do is just sand up some dust and put a drop of CA glue on it. Then sand and finish. The dust is of the original wood and matches quite nicely normally but with ambrosia maple the fungal discoloring (spalting) keeps the hole location visible. What I do is fill with a natural filler and dab a marker on it then smear with alcohol till it looks natural only without the hole. 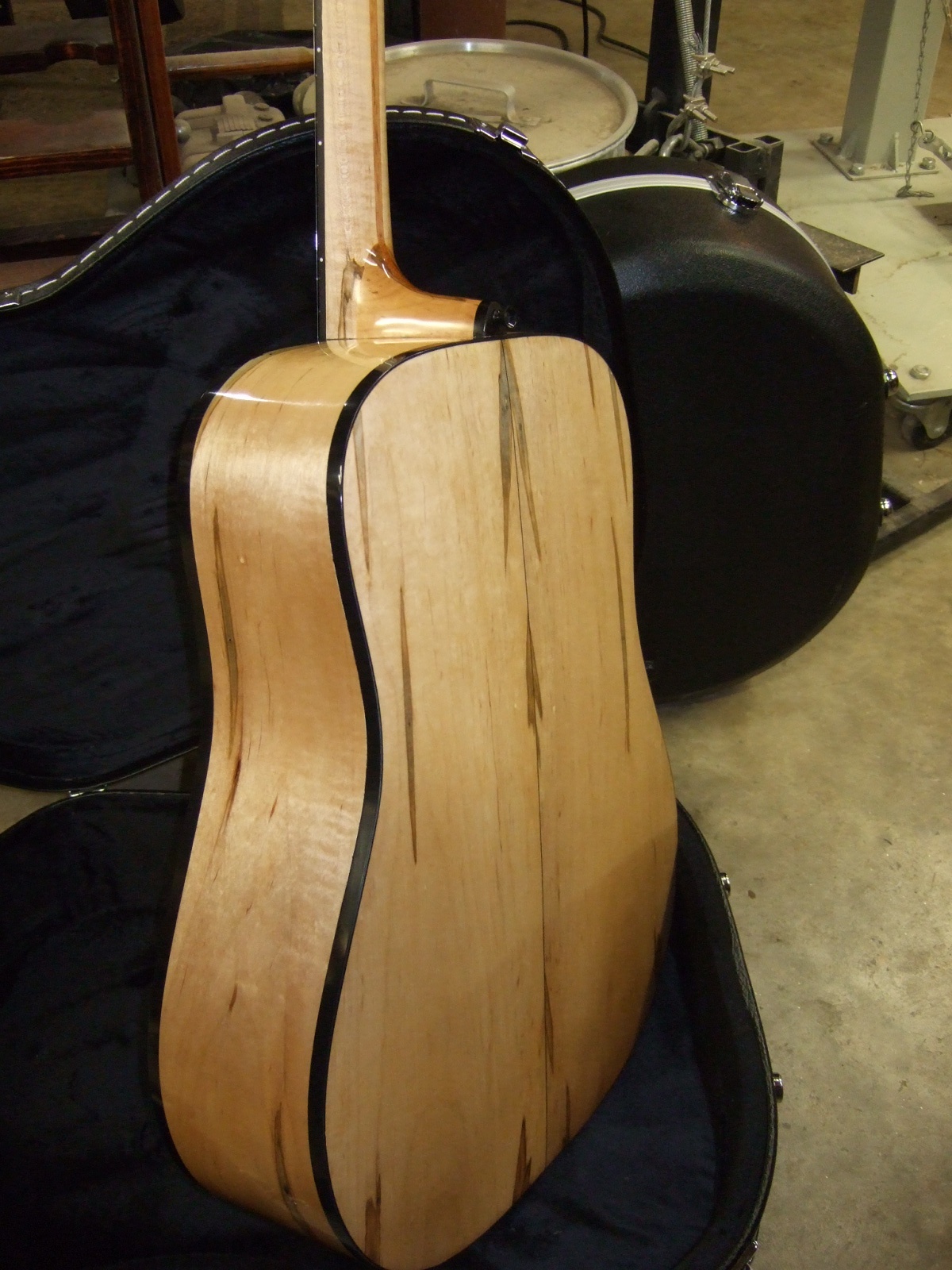