There seems to be a lot of confusion surrounding a certain type of wood called satinwood. Due to a number of reasons, the precise identity of any given piece of “satinwood” may not be immediately apparent. Let’s see if we can’t sort out this confusion, and get to the bottom of the matter.

Most likely, the origin of the term comes from the woven fabric satin, which has a smooth, lustrous face. But regardless of the source of the term, in woodworking, there are a few characteristics that are common to most types of satinwood:

Given the above characteristics, this only leaves perhaps a handful of woods that would properly fit the bill. But just because a wood possesses certain characteristics doesn’t necessarily mean that it ought to be labeled “satinwood.” With the initial qualifications laid out to help us understand what type of woods we’re generally describing, let’s dig into semantics and find out which wood(s) should be called “satinwood,” and which should not.

Will the Real Satinwood Please Stand Up?

Due to various sales tactics and marketing techniques, merchants like to give their wood species interesting names to help sell them. Much like the oft-abused terms “teak” or “rosewood,” another profit-making term that sellers throw out is “satinwood.” This might be good for a sawyer’s bottom line, but it might not be so good for woodworkers, especially if we don’t know exactly what type of wood we’re getting.

So what should be considered “genuine” satinwood, and what shouldn’t? Regardless of recent trends or marketing campaigns, there’s been only two species of satinwood that have historically been accepted as satinwood in its truest sense, and both are in the Rutaceae family (which also includes the Citrus genus, containing Orange, Lemon, Lime, etc. trees).

The above information can be helpful to use before making a wood purchase, but if you’ve already acquired some wood that was confusingly labeled as “satinwood,” it might be necessary to dig a little deeper to get a positive identification. Follow these steps below to help lead you to a better understanding of what you’ve got:

If you have veneer:

Take a close look at the grain texture of the face of the wood (use a magnifying glass if necessary), and note the coarseness of the grain and the size of the pore openings. (For instance, if you look at the full-sized scans of genuine satinwood above, you’ll notice that the grain “lines” are very thin and fine; this is contrasted with the grain of Movingui, which should look comparatively coarse, with thicker grain “lines.”)

If the veneer sample has a fine texture, and looks by all other outward indications to be a sample of satinwood, it may be very difficult to tell Afrormosia from true satinwoods, but as a general rule, most veneer slices of Afrormosia will be more of a golden yellow or a darker shade of brown, while satinwood ranges from bright yellow to golden yellow.

If the veneer sample has a coarse texture, pay close attention to color and figure. Pyinma is strongly curly, but doesn’t exhibit the mottle or beeswing figure that the other woods have. Pyinma’s color can also be more varied, and can range from an off-white to a darker yellowish or reddish-brown. Movingui tends to be a bright golden yellow, with mottled and/or curly figure. Avodire can look very similar to Movingui, but tends to be a paler yellow, frequently almost white, and with a weaker and more loose mottle figure. Obeche is a light yellow or white, and has almost no grain figure; it’s a very soft and light wood, comparable to Basswood.

If you have solid lumber:

Weight should be a very reasonable and accurate indicator to begin dividing lumber. If you can’t use a scale to weigh the wood, try to get a feel for the wood’s weight as compared to another known wood, such as oak.

Remember that wood density varies by an average of +/- 10% of the weight listed above, so there’s enough overlap in many of these wood species to eliminate using weight as the sole means of identification. Also, these weights are listed for dry wood; if you have a turning blank that’s still green (such as Pyinma), then just about any kind of wood can potentially feel heavier than oak.

If the wood sample is heavy (noticeably heavier than oak), then look at the endgrain (preferably with a 10x magnifier).

If the wood sample is light (about as heavy as oak), then you can immediately separate Obeche from the rest on account of its extremely light weight, which is roughly as heavy as Basswood. Following this, look at the endgrain (preferably with a 10x magnifier).

Pyinma is ring-porous or semi-ring-porous, and will have varying sizes of pore openings, usually arranged in intermittent rows corresponding to growth rings. It also has extensive banded parenchyma, visible as white lines running parallel with the growth rings.

Avodire has medium sized pores in no specific arrangement, with very little visible parenchyma, except some limited vasicentric parenchyma. Rather plain endgrain anatomy.

Movingui has medium sized pores in no specific arrangement much like Avodire, but Movingui also has well-developed parenchyma surrounding the pores which are aliform (winged and lozenge), confluent, and banded.

Afrormosia has parenchyma that’s much the same as Movingui (aliform, confluent, and banded), but the pores are somewhat small in Afrormosia, with a much high pore density as well. 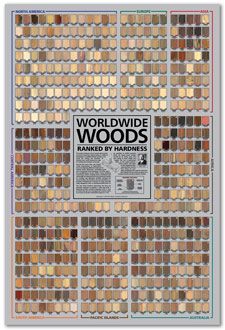 It seems you have forgotten mentioning at list one African species, much more susceptive than Afrormosia. (a picture taken from one of wood-stock shops) This is Aningeria spp., also known as asanfena (Ghana), agnegre (Cote-d’Ivoir), Iandosan (Nigeria), mukali, kali (Angola), mukangu, muna (Kenia), osan (Uganda). I came to this info searching for what a ‘satinwood’ veneer I’ve been given (a friend of mine could not recall where it came from initially and what was the name) – and still I’m in doubt, my sample looks a lot like on the picture and in the same time similar to E.I. Satinwood… Read more »

this has been very interesting thank you very much,i live in Kuwait and found on a deserted Beach a large piece of timber 30 ft by 4-5 ft diameter as i am a wood carver i instantly started using it for some pieces i was commissioned for but could not identify it.now i know it is indian satin wood and very old…thanks again

Very interesting article as I have just aquired some satinwood veneer very very expensive for antique clock case renovation 1820s hardly any figure in it !! I would say beeswing is impossible to obtain in this country but fairly plentiful in america (I FIND THAT SAD) Great article

Thanks, really enjoyed the article. I am a knife maker in South Africa,
always on the look-out for hard woods with a close, tight grain, with a
high finished lustre. See attached photo of African sneeze wood –
Ptaeroxylon obliquum. Very hard and dense, and requires no sealing.
Polished to a high lustre. Unfortunately, very difficult to come-by. 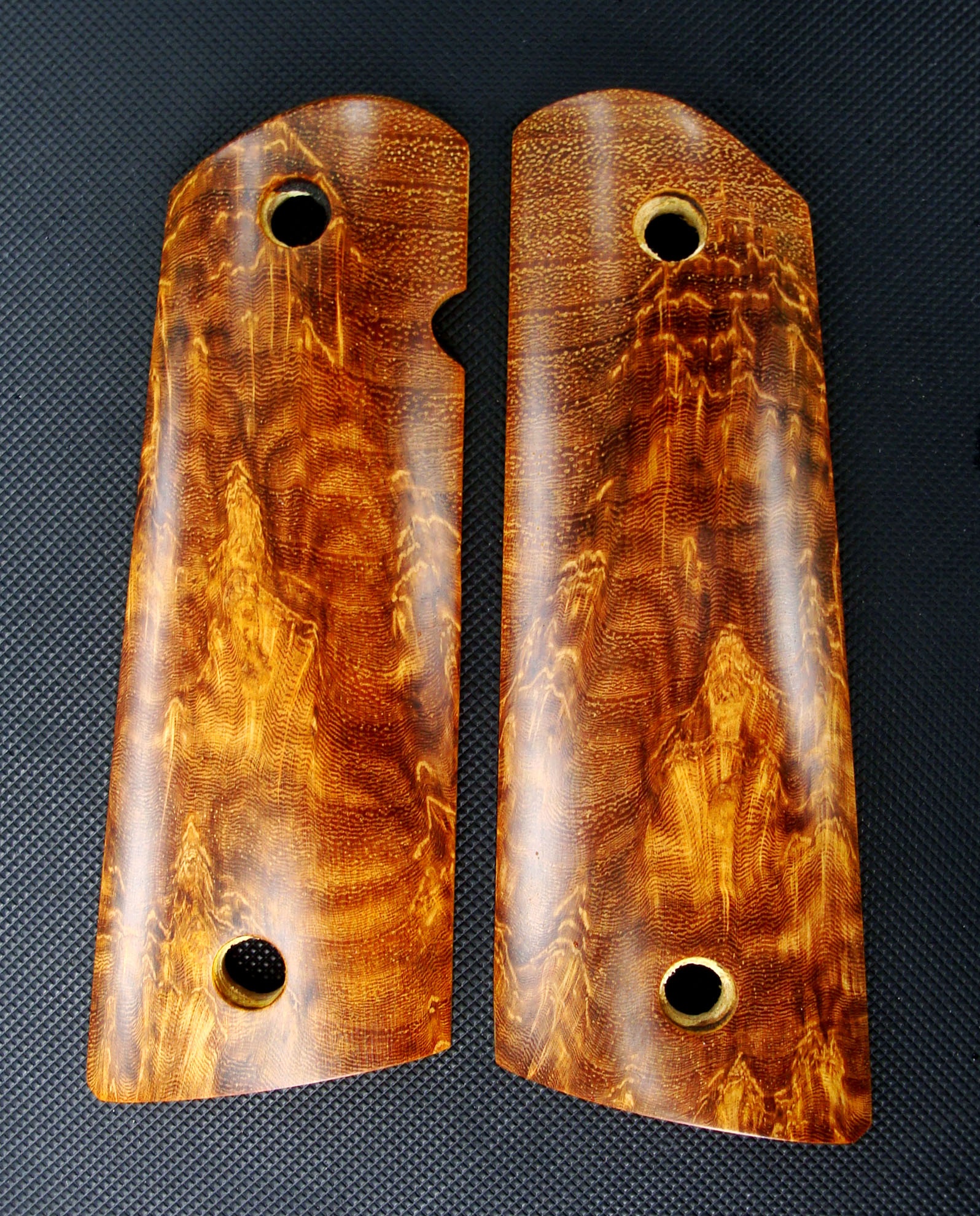 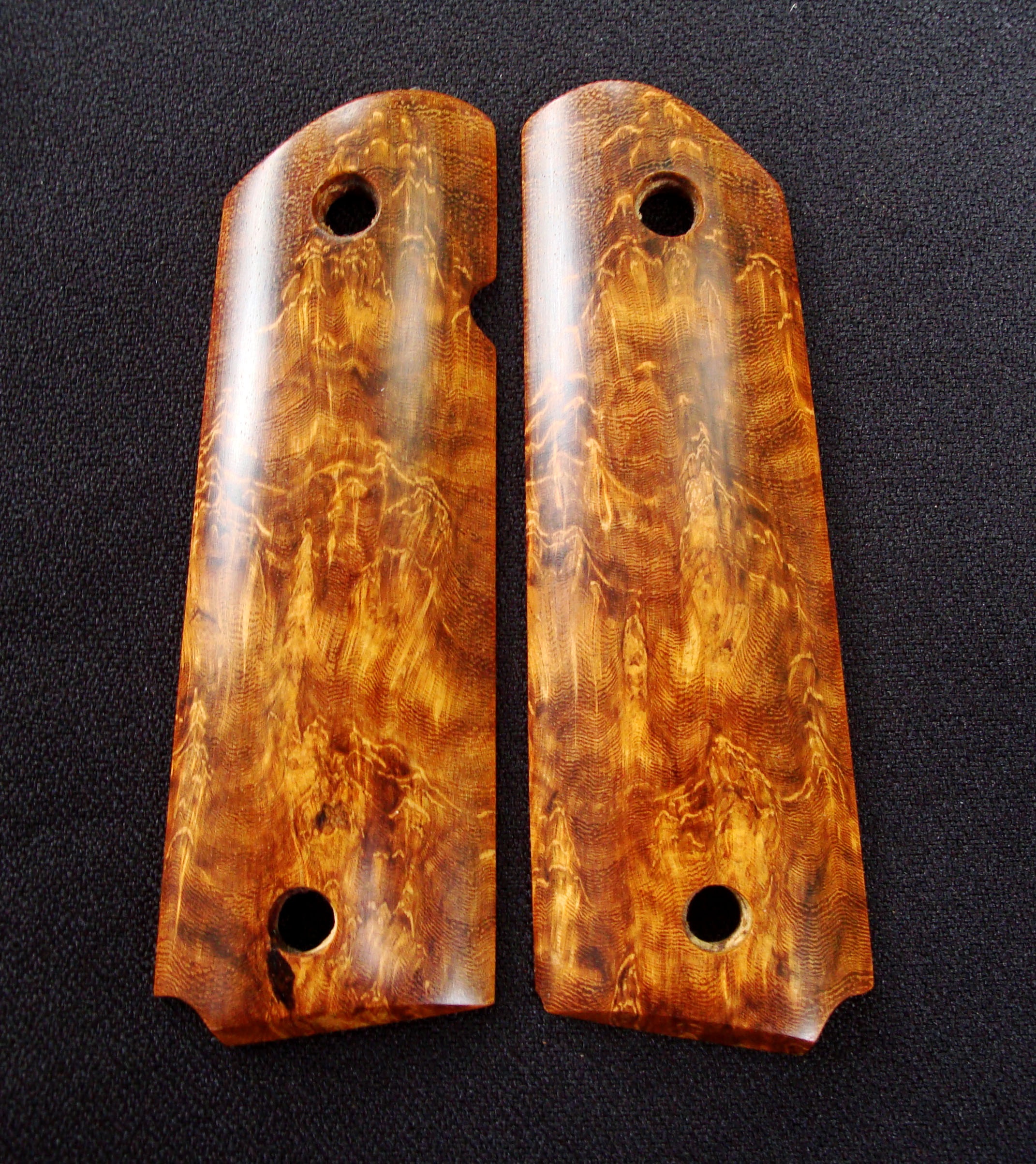 I was just reading the article and saw your Movingui. Here is a picture of a set of 1911 45acp handgrips that a friend of mine made out of Movingui. There is a deffinate oriental pattern that emerged after he finished the grips.

Thanks, really enjoyed the article. I am a knife maker in South Africa, always on the look-out for hard woods with a close, tight grain, with a high finished lustre. See attached photo of African sneeze wood – Ptaeroxylon obliquum. Very hard and dense, and requires no sealing. Polished to a high lustre. Unfortunately, very difficult to come-by.