Color/Appearance: Often completely black, with little or no discernible grain. Occasionally slightly lighter, with a dark brown or purplish hue. The pale yellow sapwood is usually very thin, and is clearly demarcated from the darker heartwood.

Rot Resistance: Heartwood is rated as very durable in regards to decay resistance, though only moderately resistant to insects/borers. The lighter colored sapwood is commonly attacked by powder-post beetles and other borers.

Workability: Very difficult to work with hand or machine tools, with an extreme blunting effect on cutters. African blackwood is most often used in turned objects, where it is considered to be among the very finest of all turning woods—capable of holding threads and other intricate details well. When made into clarinet or oboe bodies, the wood is typically processed on metal-working equipment, giving it a reputation as being metal-like in some of its working properties.

Odor: African blackwood has a mild—though distinctive—scent while being worked.

Allergies/Toxicity: Although severe reactions are quite uncommon, African blackwood has been reported as a sensitizer. Usually most common reactions simply include eye, skin, and respiratory irritation. See the articles Wood Allergies and Toxicity and Wood Dust Safety for more information.

Pricing/Availability: African blackwood is very expensive, on par with true ebonies such as Gaboon Ebony in the Diospyros genus. Since the tree grows so slowly, and is generally small and gnarly, available boards tend to be narrow—though large clear sections have occasionally been harvested from older trees that yield bookmatched guitar backs (~8″ wide).

Sustainability: African blackwood is listed on CITES appendix II under the genus-wide restriction on all Dalbergia species—which also includes finished products made of the wood. It’s also reported by the IUCN as being near threatened. Technically it doesn’t meet the Red List criteria of a vulnerable or endangered species, but is close to qualifying and/or may qualify in the near future.

Comments: To be considered the original ebony, African Blackwood was imported and used in Ancient Egypt thousands of years ago. Even the name “ebony” has an Egyptian derivation as “hbny”—which has been shown to refer to primarily to Dalbergia melanoxylon, rather than the species which are considered to be ebony today: such as those in the Diospyros genus. In addition, African blackwood is technically in the Rosewood genus (Dalbergia), and is more stable and resistant to movement and warping than other types of ebony.

African blackwood is considered to be among the hardest and densest of woods in the world; indeed, among some 285 species tested, (including Lignum Vitae), Gabriel Janka originally found African Blackwood to be the very hardest. Unfortunately, many online sources list African blackwood’s Janka hardness at only ~1700lbf—which seems very unlikely given its confirmed specific gravity.

Images: Drag the slider up/down to toggle between raw and finished wood. A special thanks to Steve Earis for providing the endgrain wood sample and turned photo of this wood species. 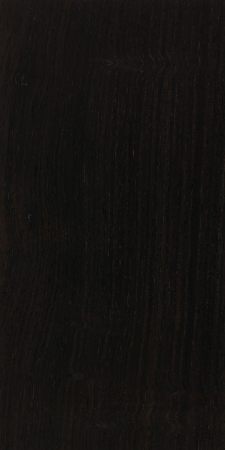 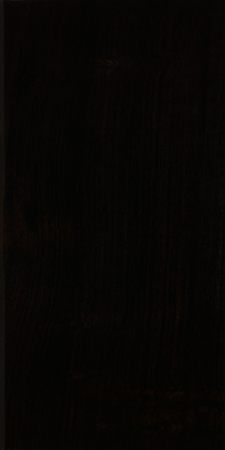 Lookalikes/Substitutes: Commonly confused with species of ebony (Diospyros spp.)—both of which can have completely black heartwood.

Notes: Portions of the lighter sapwood have been included to help illustrate anatomical features more clearly. In very dark woods, it’s very useful to look at sapwood rather than heartwood to help see details that would otherwise be obscured in blackness.

Hi, can you tell me what wood this is? This item is made of wood indigenous to Africa, in the early 1900s and is very heavy- heavier than ipe.

It’s that wood is good for build a batiment (a house by exemple) ?

yes it can be but buying all that wood would be highly expensive and how would you even find it during the nighttime?

in 1992 PBS Nature broadcast a documentary about African Blackwood, “Mpingo: The Three of Music.” I just found it online: https://www.youtube.com/watch?v=wUcW1dRH2XQ The demand for this wood for clarinets, oboes, bagpipes etc really has reached a crisis point. The largest woodwind manufacturing companies keep up with the huge demand for this wood (in the music world we usually call it grenadilla) by using it before it’s fully seasoned, pressure-treating it with oil to compensate. Unfortunately, the result is a wood that isn’t stable in the long term, so that instruments “play out” after a number of years, going so irremediably out… Read more »

I just finished 3 guitars with African blackwood bridges. To my dismay the bridge on the first one had pulled up off the soundboard before I finished the third one. The other bridges are pulling away too. I never had this problem with ebony. I just wiped the bottom of the first bridge with acetone and was surprised at how much black oil came out of the wood. When no more black stuff came off on the rag I re-glued the bridge. Hoping it will stay put now. The other 2 will have to be done over too. I’ve seen… Read more »

Do you think the pulling was due to the oil in the wood, or could it be that the blackwood wasn’t fully dry and acclimatized to the moisture level of the surrounding environment?

The bridge blanks came from a reputable dealer of luthier woods and were stored in my shop for several months. I’m pretty sure moisture and wood movement weren’t the issue. After acetone and re-gluing, all 3 bridges have stayed down. This stuff is just really waxy or oily. Clogs sandpaper like crazy. That may be why it takes such a nice polish with no finish.

Did anyone try to test its impact strength? comparing to Kingwood for example? Any data available for it is appreciated.

Does anyone know if this wood’s brown colour is soluble in water?

Yes, the colour is soluble. I have an English horn bell which discolored when soaked overnight. The instrument’s maker claims the wood was not stained.

African Blackwood is a great contrasting color embellishment on small turnings like yo-yos and tops. It’s super fine grain is perfect for ornamental turning as well. 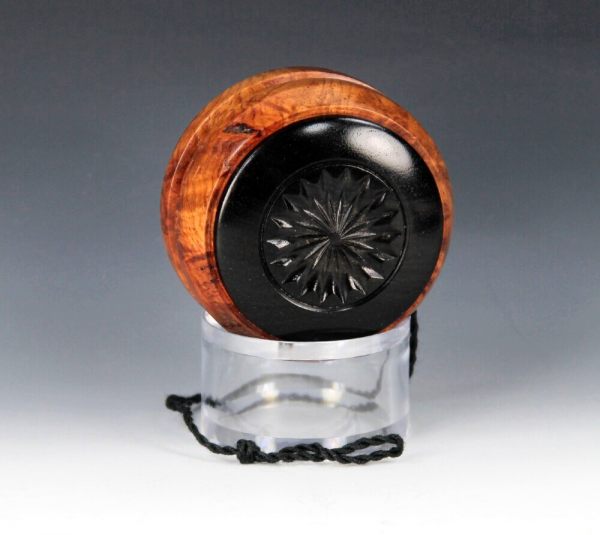 I am wondering if African Blackwood would work well for an axe handle considering that it has a fairly low elastic modulus which I am assuming allows the axe to bend more and absorb shock. Typical axe woods like hickory are not too far off from it in terms of elastic modulus. I am curious about this because African Blackwood is much more dense and rot resistant than hickory as well as having a much higher modulus of rupture. All of this seemingly in my mind would make it a superior wood for an axe handle even though this tree… Read more »

The trees do not grow large or fast enough for this to be a good or sustainable use for this wood.

If it’s of the “viking family heirloom for murder mayhem” kind….maybe?

If it’s a crude tool for chopping crap down or splitting logs for the fireplace, NO. It’s rare, expensive, and restricted so it’ll only get rarer and more expensive still.

It is a good wood for pipes. I use a small blackwood pipe and I know of people who use african blackwood for bowl inserts.

Still inquiring for the international market prizes for the African blackwood logs/ per cubic meter. My email is bnoyo@yahoo.com

INQUIRING MORE DETAILS ON AFRICAN BLACKWOOD INTERNATIONAL MARKET.
WE ARE UGANDANS AND ABLE TO SUPPLY ANY MARKET. P’se email bnoyo@yahoo.com

I bought some ebony from a lumberyard, but discovered that the wood exuded some fragrance when sawn. So I started digging and I really think I have african blackwood rather than ebony as the seller claimed. The piece on the right seems to smell like ebony, but I do not know if smell is a reliable identification. I rubbed some shellac onto the wood with my bare finger to see what the wood looks like, and the wood exuded a LOT of oil. I tried the same thing on known samples of gaboon ebony and macassar ebony (both of them… Read more »

It does sound like you probably have some African Blackwood on your hands. In my opinion, it’s a superior wood anyway. Stronger, and more dimensionally stable. Not sure how you’re gluing it, but as with any oily wood (ebony can be hard to glue too…) you should proceed carefully.

I never had any issue with gluing ebony except for one time when the glue I used was mixed improperly (was using hot hide glue), and the ebony probably oxidized for quite some time. Since I am making bridges I don’t really want to use epoxy because it might need to be removed later on for whatever reason.

why is the African backwood endangerd

As far as I understand it, African Blackwood is not endangered. It’s listed by the IUCN as “near threatened” but that only measures the likelihood that the tree species will become biologically extinct in the wild. However, there’s a great difference between becoming biologically extinct (what the IUCN measures) versus becoming commercially extinct. While not at risk biologically, commercially only ten to twenty percent of mature trees are suitable for exportation, and harvesting is frequently done at an unsustainable rate.

How much weight can a 2ft. x 8ft. log of African Blackwood support before breaking.

Depends where the weight is focused and if there is any supporting structures.

I’ve used this wood as well as Kamagong for impact type weapons
the gravity question is not as important as is the question of
durability. These hardwoods are normally used for strength training
in the wrist, forearms and shoulders and should not be used two
man drills.

I’ve seen rattan sticks break Kamagong in half, because of the
brittleness of these type of hardwoods the best solution I’ve
found is Cold Steel’s polypropylene sticks. They have the weight
and density of African Black wood and is almost indestructible
and more cost effective than wood.

Stickman Escrima Products were the first plastic sticks to be successfully marketed. The “Panther” sticks have similar weight and density to woods like ebony, are much more durable than hardwoods and feel more “wood-like” than polypropylene. The “Panther II” are lighter but also can be finished to look like wood, and are also much more durable.

I have a question about the Janka test with African Blackwood. If the steel ball is pushed into the wood at the depth that all of test criteria specify, which is 2900lbs, what does the specific gravity have to do with the actual Janka test and what does it mean? I’m planning on have an impact weapon made with this wood and I’m interested in durabilily of this specific wood.