In addition to being hygroscopic (gaining or losing moisture from the surrounding air), wood is also anisotropic. What this means is that wood has different properties depending on the direction or orientation of the grain—it’s not the same in all directions—and one of the areas where this property is most clearly seen is in dimensional shrinkage.

As opposed to a simple sponge or other isotropic material, wood (anisotropic) does not shrink in a perfectly uniform manner, and understanding this will help to avoid some pitfalls in preventing many shrinkage-related defects which may not crop up until months (or even years) after the wood product is finished.

A basic measurement of shrinkage—expressed as a percentage—is the amount that the wood shrinks when going from its green to ovendry state. In other words, since wood in its green state is at its largest dimension, and ovendry represents its driest (and therefore smallest) volume, green to ovendry is a measurement of the maximum possible percentage of shrinkage; this is referred to as the wood’s volumetric shrinkage. 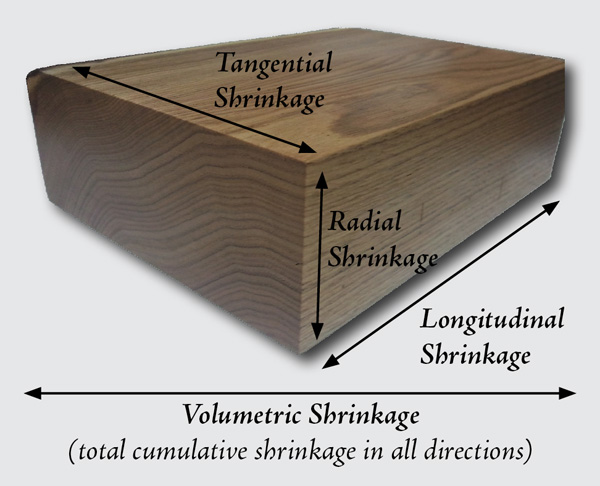 The amount a piece of wood will shrink lengthwise, called longitudinal shrinkage, is so small—typically about 0.1% to 0.2%—that it is usually inconsequential to the volumetric shrinkage. However, plywood greatly benefits from the low longitudinal shrinkage of wood—layers of wood veneer are glued together with the grain direction of each ply oriented perpendicular to the adjacent ply, which has the effect of restraining most radial or tangential shrinkage within the veneer plies. As a result, the rates of shrinkage for the width and length of a plywood panel are typically less than 1%, (though changes in thickness still remain about the same as solid wood).

(It should be noted that just because a particular wood species experiences a high initial shrinkage during drying, doesn’t always correlate to an equal swelling after it has been dried. For instance, Basswood has fairly high initial shrinkage percentages—6.6% radial, 9.3% tangential, and 15.8% volumetric—yet its movement in service is relatively low. Using shrinkage and T/R ratio data simply offers woodworkers the best means of making an educated guess.)

As a general rule of thumb for most species, the tangential shrinkage is roughly double that of the radial shrinkage, which translates to an average T/R ratio of about 2. This helps explain why quartersawn boards are considered more stable than flatsawn boards: with quartersawn lumber, the thickness of the board is doing the majority of the shrinking or swelling, with the face of the board exhibiting minimal change in width—a useful characteristic for applications such as flooring planks or workbench tops.

Get the hard copy

Can I ask, please. Would green oak be suitable for a plank table in a conservatory. Obviously it’s quite a damp atmosphere especially in the winter months, but it’s hot and damp in the summer months. A suitable oak fell in the last storm and I wondered if it could replace the veneered planks on the two tables I have in my conservatory. Grateful for some advice!

Hard to say for sure without knowing more details of width of planks, MC of wood, etc. Generally, you’d want to avoid directly using green wood for most projects, and allow planks to reach EMC first, especially before final jointing/planing.

Thank you so much Eric. I’ve done a little more digging and one of the reasons I asked is that if you could use it green I’d get it much sooner! Yes, boredom during Covid is a problem here! The lengths will be 2 meters, with 30cm and depth is 3 cm. I do have a local timber merchant who can kiln dry it for me. The other reason is that we have offered 2 oaks for the rebuilding of Notre Dame in the name of our 4 French grandchildren and that apparently has to be green although it’s not… Read more »

I felt like a bum for using this site so often so I bought the book. It’s great but when I Google a question about wood, I’m often brought here again.

If I’m working with 2 x 8 pressure treated lumber measuring 7 1/2″ and the wood has a moisture content of 20% what can I expect the lumber to measure after it has dried out? Thank you!

I made a mistake. The moisture ranges anywhere from 30 to 50% on these new boards with an average rating of near 35%. I was told that they were kiln dried before treatment.
I’m expecting the lumber to dry to somewhere near 9%. Thank you.

I want to build a guitar neck from a quarter-sawn piece of lumber. For shrinkage of the finished neck due to changing humidity, I primarily care about the change in the length of neck, since that is what affects the pitch of the strings.

Is there any source of data for longitudinal shrinkage of various species?

The shrinkage in length is inconsequential with respect to fingerboard length. The 0.1% quoted above is for volumetric shrinkage from green. The wood you’ll be using for an instrument should be dried to about 6 or 7% moisture content. The seasonal dimensional changes in length of dry wood will be only a very tiny fraction of the 0.1% stated in the article.

Should longitudinal shrinkage be accounted for in furniture making? Example?

Hi, I’m Interested in wood with similar shrinking properties, specifically, mahogany and anything else that is way less expensive that I can use in conjunctiin with mahogany. I have a huge project going on and Id like to mate different species in various capacities where the magogany will be showing and the cheaper would would never be visible. This would enabke me to use much less mahogany than if I used solid pieces and I could not only cut the cost way down, but would also have an easier time sourcing material if using less actual mahogany. This all depends… Read more »

You didn’t mention if it also had to be similar hardness/toughness. Yellow poplar is a cheap wood with pretty good stability, though you wouldn’t necessarily see that from it’s volumetric shrinkage number. Another choice might be red alder. All this would be dependent on finding clear and quality boards that don’t have any knots. Also, you may want to seriously consider mahogany veneer instead.

“volumetric shrinkage is essentially equal to the sum of the three shrinkage percentages shown above” — would it not be the product? v = wxbxh?

In practice, the error you get from this approximation will be swamped by the variation between different pieces of wood. So it’s a safe “close enough” rule to use.

It is okay to have shrinkage percentage as high as 64%

Many thanks for sharing the shortcuts. I have been wondering about the best way to attach a solid wood table top to its support rails to allow for its shrinkage/swells and the first paper has given me a few suggestions. Good papers to read for anyone who is interested in wood or woodworking.

I have a simple question, I have made some white pine table tops that in the middle of winter split up the middle , ussaly when the table had opposite direction grain end boards at each end . I am assuming this was a result of my lack of ensuring the wood was 6-8% mc. I think if I keep the wood low in numbers like 6% or even 5.5 % mc and seal it with extra lacquer that it will handle the dry winter inside a home ? Or should I not use end boards , or switch to… Read more »

Will freshly milled dimensional eastern red cedar shrink and expand greatly in the first couple of months it is laid down. Having a slow start and wondering about tight fitting on later boards.

I’m wondering how a wood species’ T/R ratio relates, if at all, to its tendency to check, especially in large boxed heart beams. Here are my hypotheses. I noticed that eastern white pine, even though it has very low shrinkage numbers, has a very high T/R ratio, and I’ve read elsewhere that it checks more than other species, so that makes me think higher T/R ratios would be associated with more checking. With a boxed heart beam it would seem like checking would normally be the result of wood shrinking faster tangentially than it shrinks radially, but since the circumference… Read more »

I can offer some insight from a scientific perspective. In order to help understand, lets consider what causes checks. Checking occurs when the forces acting upon the wood exceed the tensile strength causing the wood fibers to pull apart and resulting in cracks. Also notice that these happen running parallel with the grain, which suggests that the forces are acting perpendicular to the grain. As to your first question, the higher the T/R ratio the more the relative amount of tangential shrinkage occurs. Both these shrinkages happen at right angles to the grain. As the T/R ratio gets closer to… Read more »

WE ARE HAVING ISSUES IN SHRINKAGE. WE USE CHIP CORE AND WE GLUE A SOLID WOOD PIECE AROUND THE PERIMETER. HOW MUCH MOISTURE VARIANCE SHOULD THERE BE BETWEEN THE TWO SUBSTRATES ?

We have problems of swelling in Oak Glulam furniture doors made by Venjakob, the door is only 688mm high and has swelled by 8mm, the relative humidity range of the room is between 45-55% and the temperature range is between 18 – 22 deg. The glue laminated timber runs horizontally and the door thickness is 20mm. Can you please advise what your assessment of the problem is.

what was the moisute content of the wood during production of the furniture? It should be between 6-8% otherwise it may cause problems as described

We had hardwoods installed throughout (except bath and kitchen). In the hall the wood is laid perpendicular to the hall and terminates in the foyer. This is where the directionality changes as the foyer is laid parallel to the hall so the wood meets sort of T shaped.Very easily a quarter could be dropped in the winter gap. I’d guess it is easily 1/8″. However, at the other side of the foyer is the dining room and the direction of the planks is identical to the foyer. At the end of the dining room is the kitchen. The gap at… Read more »

you need to find a way to control the humidity in your house. the change in gaps between boards are from a change in the humidity.

Im getting ready to cut down a large pecan and cedar tree. I plan to slab both for table top projects. If I want a finished 3″ thickness, how thick do I have to cut it green? Does the book cover this type of info?

Wood this be mostly for quartersawn lumber? Or do plainsawn and rift sawn shrink in the same manner?

Quartersawn lumber tends to shrink/expand more in it’s thickness, and not as much in its width (dependent upon the wood’s T/R ratio). Plainsawn is just the opposite, and is the least stable, shrinking most along the width of the board, and least in thickness. Adding to its instability is the fact that most plainsawn boards do not have perfectly horizontal grain, but tend to have a varying pitch to the grain, edging more towards rift or even quartersawn (vertical grain) towards the edges of the board.