Color/Appearance: Heartwood is streaked with yellows, reds, oranges, and pinks. Color and figure can be highly variegated.

Grain/Texture: Pores are open and medium-sized. Grain is usually straight, with a fine texture.

Rot Resistance: Reported as having a low decay resistance, although it is resistant to insect attack.

Odor: Has a mild, fragrant odor when being worked.

Allergies/Toxicity: Although severe reactions are quite uncommon, rosewood in the Dalbergia genus, (such as Tulipwood), has been reported as a sensitizer. Usually most common reactions simply include eye, skin, and respiratory irritation. See the articles Wood Allergies and Toxicity and Wood Dust Safety for more information.

Pricing/Availability: Likely to be very expensive, and seldom available as boards. Tulipwood is most often seen as smaller turning stock, with its cost being on par with other scarce exotics in the Dalbergia genus.

Sustainability: Although Brazilian Tulipwood is not evaluated on the IUCN Red List of Threatened Species, it is listed on CITES appendix II under the genus-wide restriction on all Dalbergia species—which also includes finished products made of the wood.

Comments: Not to be confused with American Tulipwood, (more commonly referred to as Tulip Poplar or Yellow Poplar), Brazilian Tulipwood is considered a true rosewood in the Dalbergia genus.

Tulipwood is a stunningly beautiful hardwood which is in short supply. The tree itself is only found in a narrow geographical area, and it’s small enough to be considered a shrub: typically yielding very small and narrow boards. Because of these limitations, Tulipwood is generally reserved for very small specialty wood items and accent pieces.

recorder no. 2 please if possible. thank you for your time. 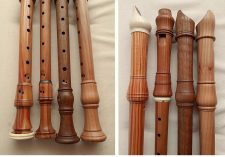 Hi, I am so grateful for this site – I have learnt so much in regard to purchasing recorders – you have helped me so much with information and accuracy. I have done some woodworking (furniture design at uni), but am stumped as to the wood of this cupboard. Over 25 years old now…recorder images attached too – 1st is tulipwood, 2nd unknown, 3rd english walnut?, 4th cherrywood (according to the makers). If anyone can help in regard to the cupboard, that would be wonderful. The photos don’t do it justice – a deep orange with yellow undertones, and bright… Read more »

Has anyone else experienced this wood exploding while drilling? I was drilling a pen blank from tulip wood and one part made a popping sound then split and the other started smoking then less than a second later exploding making a loud bang and sending one half of the blank 2 meters from the drill. Drilled many different tropical woods with the same drill that day and none of them done that. I expect this is due to the high volume of oils in my piece vaporising and combusting due to an overheat. How can I prevent this from happening?

maybe you need to reduce the speed? And change the shape of the nozzle , drill, and cutter.

next pic, i could only upload 1 each time

Dalbergia Decipulares, only’s 4 references all registered for over 20 years, would be a very high risk trying to find

does tulip wood shrink much?

I’ve never found exact shrinkage numbers, but it’s reported to be stable i service, so like other rosewoods, it probably has low shrinkage.