Color/Appearance: Color ranges from a lighter salmon pink to a darker brownish red. Appearance has been likened to both Black Cherry and Honduran Mahogany. Color tends to deepen with age.

Grain/Texture: Has a medium texture and small to medium sized open pores. The grain tends to be straight and even. Also, since the wood is grown and pruned on a plantation, there tends to be few knots or other abnormal grain patterns.

Rot Resistance: Mixed reports, with most sources rating the heartwood as moderately durable in regard to decay resistance, though it is susceptible to insect attack.

Workability: Generally easy to work, though it can burn easily. Glues, stains, and finishes well.

Allergies/Toxicity: Besides the standard health risks associated with any type of wood dust, no further health reactions have been associated with Lyptus®. See the articles Wood Allergies and Toxicity and Wood Dust Safety for more information.

Pricing/Availability: Should be reasonably priced, especially  for an import. (This is most likely due to the source of the wood: which is exclusively grown on plantations.)

Comments: Lyptus® is merely a trade name, which is a registered trademark owned by the Brazilian company Fibria. The Lyptus® brand is marketed in the United States by Weyerhaeuser. The actual tree species, which is grown on Brazilian plantations owned by Fibria, is a Eucalyptus hybrid of Eucalyptus grandis and E. urophylla.

In terms of mechanical/physical characteristics, Lyptus® has a very high shrinkage rate, and is likely to experience a fair amount of seasonal movement. The wood is relatively hard, heavy, and strong, though as a general rule, the paler pinkish brown boards tend to be less dense, while the darker reddish brown boards tend to be heavier and harder.

We had Lyptus raised panel cabinetry in a house we built in 2002. I never noticed any shrinkage or seasonal movement while living there for 15 years. It is beautiful wood.

Great wood all of my cabinets are made of Lyptus since 2007. Still looks new. Very Happy with it

I wanted to comment on the durability of Lyptus. I’ve had a 1/4″ piece of plywood and 5/4×12″ boards leftover from a project that was sitting out in a unconditioned shed for at least the last 10 years. After scraping off the bugs and dirt I used in it a project last week. Besides having to take the warp out of the plywood (it was leaning against a wall for a decade) it appears to have just come off the truck. I wish I would have taken before and after shots. The stuff is bug resistant and holds up better… Read more »

I have been using Lyptus to build fine furniture in commercial and residential applications since 2008. I have had nothing but great success. My challenge is getting inventory. Suppliers here in West Canada do not supply it. I’m forced to order a entire lift at a time. To my knowledge virtually no one is using it in my region. I’m pleased to be a advicate for spreading the word on this great hybrid wood, Lyptus. A suggestion is to try making a endgrain cutting board. The endgrain patern is fantastic. 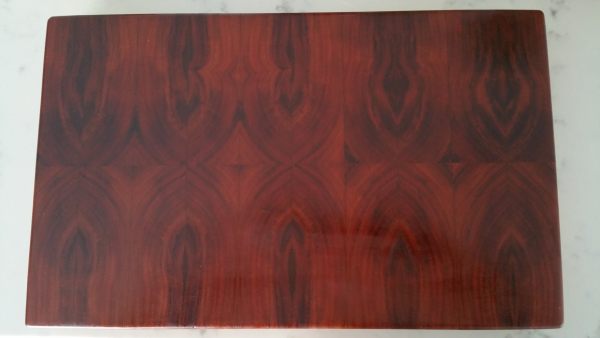 “Related to red gum” don’t trust it on a large project. Build something small with joints and place in a dry heated space for a year or so. You won’t like it.

Made a 6 foot by 4 food oval ended table out of edge joined lyptus and it sat in an unairconditioned garage for 5 years while we were cruising the atlantic in our sailboat. 15 years later it is still straiter than a strait board so to speak. Great fot big projects just use true and tried building methods so it can naturally expand and contract with the seasons.

Will it Rot outside I’d like to make a door for a storm window for outside use, I can stain and seal it. It would probably look better anyway. A nice deep reddish brown would look nice.

It is necessary to apply a sealer ???

Does anyone know the worth of such a tree
directly on the plantation ?
I want to grow Eukalyptus-Hybrid-Clones Grandis-Camadulensis

I just put in a 54″x72″ laminated Counter top of Lyptus. It turned out beautifully. Routed the ends which had no tear out or chips. Machined really easy. It is a hard wood and very heavy. I’ve had a very minimal amount of movement in the top. After clear staining to preserve the rich pinkish color, I finished it off with two coats of “Good Stuff” a non-toxic finisher which food can be placed on. Tons of small splinters when working it though. I’ve seen it used as a restaurant counter top with little if any problems.

Used it for interior trim. It works well and finishes beautifully.I wonder if it is stable enough to make up large table tops?

good stuff, chiped the ends and nailed it to my ceiling, been there ever since.

I had some beautiful deep red 8/4 lyptus that I used for the base of my workbench. Machined well and finished gorgeously… but LOTS of splinters in my hands while I was working it. Wouldn’t hesitate to use it for some furniture if I got hold of some more!