Grain/Texture: Grain is usually straight, though sometimes interlocked. Has a fine, even texture with a good natural luster.

Workability: Despite its high density, Brazilwood is reported to have good workability, responding well to machining and shaping operations.

Allergies/Toxicity: Although severe reactions are quite uncommon, Brazilwood has been reported to cause skin irritation, as well as a number of other effects, such as headache, nausea, swelling skin, and blisters. See the articles Wood Allergies and Toxicity and Wood Dust Safety for more information.

Pricing/Availability: Unfortunately, Brazilwood has been exploited in centuries past, and is now listed as an endangered species, with international trade being tightly restricted. Prices are likely to be very high, and from dubious sources. No plantations or sustainable sources for this wood are known to exist at the time of this writing (2012).

Sustainability: This wood species is in CITES Appendix II, and is on the IUCN Red List. It is listed as endangered due to a population reduction of over 50% in the past three generations, caused by a decline in its natural range, and exploitation.

Comments: Perhaps the only wood that was so famous, it was responsible for the naming of an entire nation. When Portuguese ships discovered the trees on the coast of South America, they found that the wood yielded a red dye—which made for a very valuable and lucrative trading commodity. They named the tree pau brasil, the term pau meaning wood, and brasil meaning red/ember-like. Such a vigourous trade resulted from this wood that early sailors and merchants referred to the land itself as Terra do Brasil, or simply, the “Land of Brazil”—and the name stuck.

Brazilwood is also known as “Pernambuco” to bow-makers. With Brazilwood already at a historically depleted level from the exploitation for its dye wood, today’s global demand for violin bows have pushed the tree species to dangerously low levels in its natural range. There’s no other known wood that matches Brazilwood’s quality and acoustic properties in bow-making, creating a dilemma for bow-makers.

I have a highly figured board about 3′ by 1’6″ by 1″ that i got with a load container full of exotics of a now deceased cabinet maker ,I was not sure at first but my mother identified it for me when i sent her some shavings of various woods for her to try with her natural wool dyes ( mothers eh ! where would we be without them )

Here it is under the black light.

I have a piece I bought from an estate sale, I think it may be pernambuco. There’s no aroma when working it. I put it under the blacklight and it has a faint green yellow glow. The color when freshly worked is a lighter orange red and the aged sides are a deep brown red. Did I get lucky

I would say the fact that it fluoresces under a blacklight would show that it is NOT pernambuco. Also, the pores look too large and there is too much marginal parenchyma present. To me, it looks closest to jatoba, but diffuse porous tropical hardwoods like this can be hard to ID.

I have a piece I bought from an estate sale, I think it may be pernambuco. There’s no aroma when working it. I put it under the blacklight and it has a faint green yellow glow. The color when freshly worked is a lighter orange red and the aged sides are a deep brown red. Did I get lucky?

This Brazilwood (Pernambuco) piece was turned from a shipment imported to the USA long before endangered species restrictions were put in place. Great wood for ornamental embellishments and fancy detailing.

Pernambuco is also known to clog band saw blades and drum sanders due to the wood’s oils. As I mentioned before it is easily scraped unlike sanding.

More work should be done to expose the people who financed the destruction of Brazilwood trees!

Unfortunately they are probably long since dead , it is a very hard tree to cultivate and by the time the damage was done it was already too late , the Brazilian government do work very hard to protect these trees and all the trees of the amazon under their control , but sadly illegal logging is still a huge problem

Just some information about the work ability of Pernambuco my friend Dan Maloney, a guitar builder discovered:

Pernambuco is very is very easy to shape using scrapers and shaves off pieces very well. When sanding it however, he found it easily clog sandpapers. He also said it is somewhat of a brittle wood, so care must be taken when routing Pernambuco. 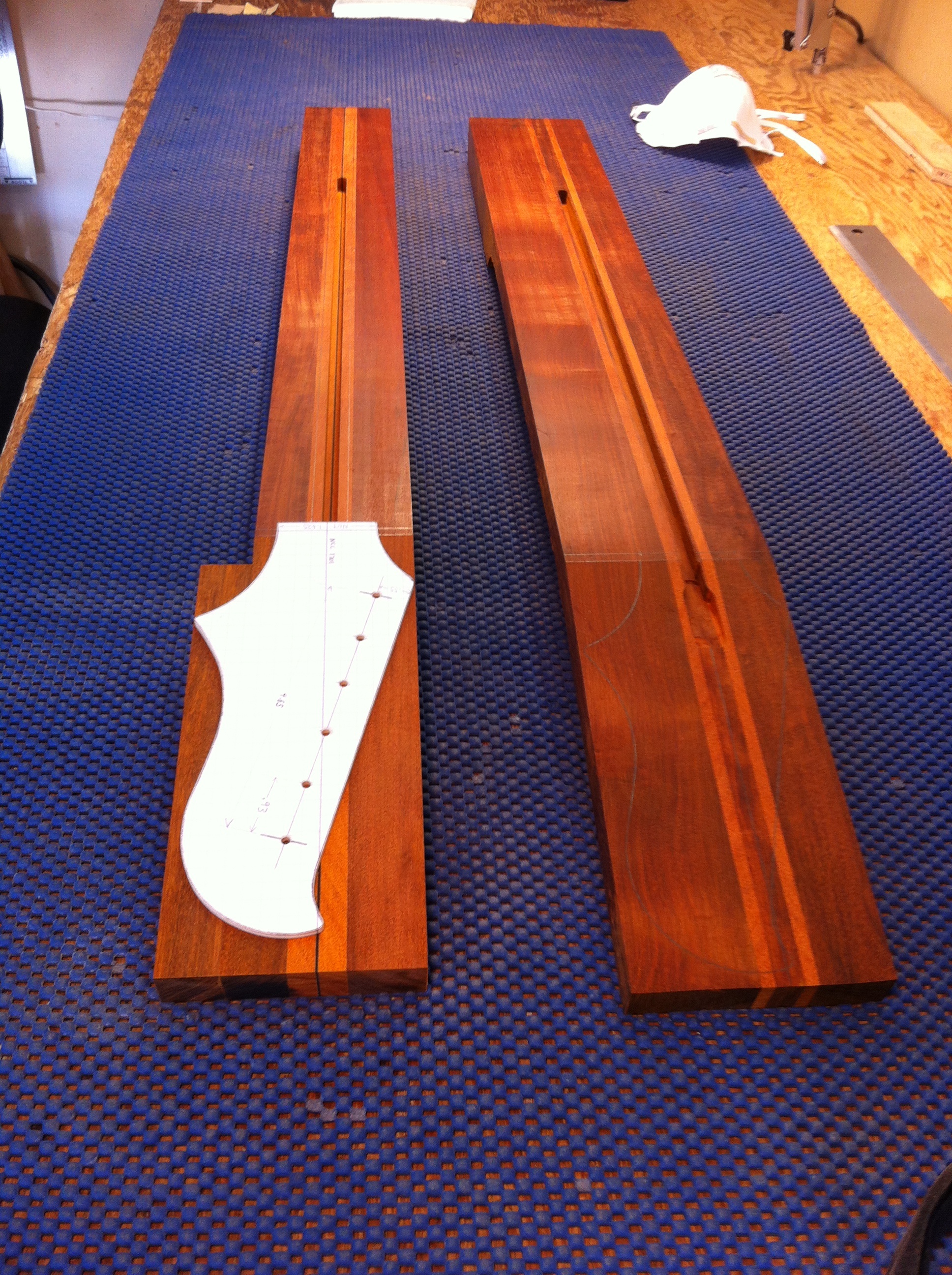 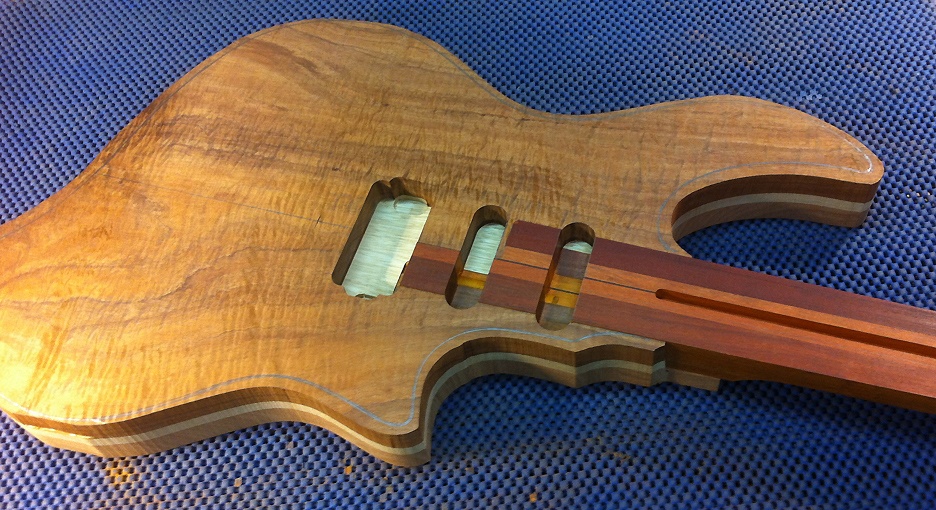 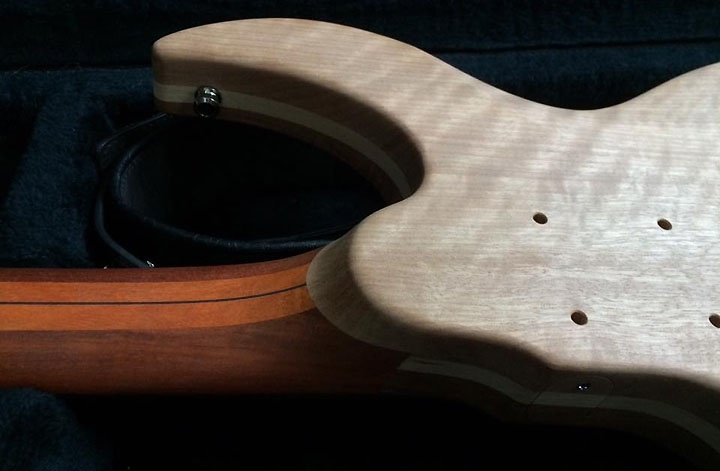 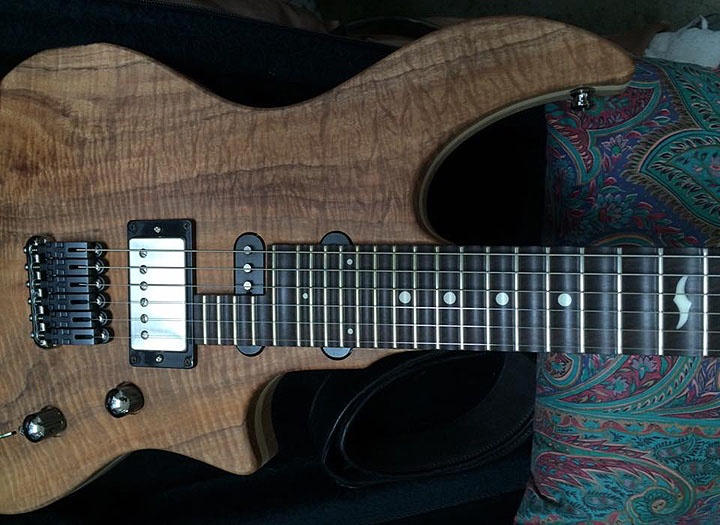 Two questions: which of the woods used in the neck are Pernambuco? Did Dan use Padauk also? I have an old slab of wood supposedly for violin bows, but it is so bright red/orange that I’m thinking it must have been dyed or it’s possibly padauk. Thanks.

Actually I just looked at a piece of padauk and that’s not what I got.

Hello! Any ideas of a substitute for making instrument bows? I guess it’s a matter of weight, hardness and elasticity?

Ipe, which is much cheaper, but not as pretty. It is sold as flooring and can be had for as little as $4.00 per bf.

Thanks, I’ll try!
It seems to be much less responsive to steam bending though, from what I read.
Pernambuco also has the unique ability to bend by heating.

Hello, I’m Brazilian and I’m a forestry engineer. The reason why Brazil wood is used for the violin bow is its unique elasticity, which allows some musical notes to be hit with the brazilwood bow

I’d love for you to recommend an alternative wood for bow making. I won’t use pernambuco if I can find something else, I’d love to ease the demand for pernambuco in your country.

oh dear,I’ve just bought a bow made of this wood.Am I adding to this species’s demise,I wouldnt have done so had I cheked the database first

I just picked up a piece from a local shop, I didn’t even know what it was.