Color/Appearance: Heartwood is a light brown or cream color with dark blackish brown streaks vaguely resembling a zebra’s stripes. Depending on whether the wood is flatsawn or quartersawn, the stripes can be either chaotic and wavy (flatsawn), or somewhat uniform (quartersawn).

Grain/Texture: Has a fairly coarse texture and open pores. Grain is usually wavy or interlocked.

Rot Resistance: Heartwood is rated as durable and is also resistant to insect damage.

Workability: The wood saws well, but can be very difficult to plane or surface due to the prevalence of interlocking grain. Tearout is common. Zebrawood glues and finishes well, though a transparent pore filler may be necessary for the large open pores which occur on both dark and light surfaces.

Odor: Has a characteristic, unpleasant smell when being worked.

Allergies/Toxicity: Although severe reactions are quite uncommon, Zebrawood has been reported as a sensitizer. Usually most common reactions simply include eye and skin irritation. See the articles Wood Allergies and Toxicity and Wood Dust Safety for more information.

Pricing/Availability: Zebrawood tends to be fairly expensive, though usually not as prohibitively expensive as other exotics such as Ebony or Rosewood.

Sustainability: This wood species is not listed in the CITES Appendices, but is on the IUCN Red List. It is listed as vulnerable due to a population reduction of over 20% in the past three generations, caused by a decline in its natural range. (A closely-related, lesser-used species in Cameroon, Microberlinia bisulcata, is also listed as critically endangered.)

Common Uses: Zebrawood is frequently quartersawn and used as veneer. Other uses include: tool handles, furniture, boatbuilding, and skis.

Comments: Sometimes called Zebrano, the wood is strong and stiff, with a fairly high density. However, the wood is much more frequently used for its bold and unique striping.

I have a slice of this zebrano wood out of which I would like to make a kitchen work top saver. Cutting vege or bread. Can i ask everyone’s opinions please. I also have another question for you knowledgeable people, Nyatta hardwood, I got my dad a new bench for his birthday, advertised as Nyatta. But I can’t find it on any wood data base. Help please in identifying this woods origin and future care. Many thanks Sarah.https://www.gardensandhomesdirect.co.uk/balmoral-hardwood-companion-garden-bench.html

This wood is very beautiful, it is used for many workmanships, in Europe also for fashion accessories.
The important thing is to preserve the natural forests, and to buy it only from areas of cultivation of wood!

This true. My piece of zebra came from the Rocker Wood working store scrap bin. 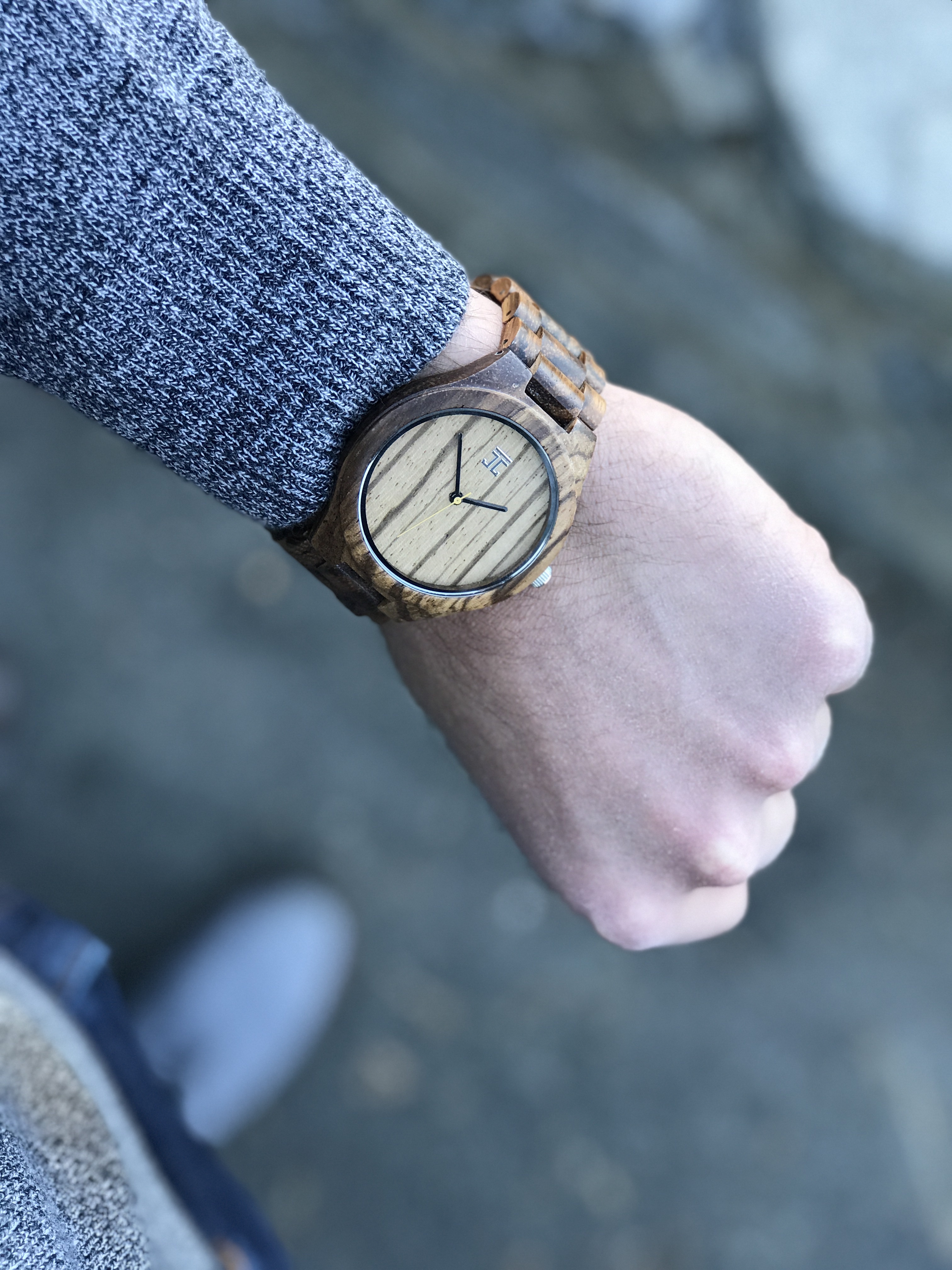 Just got this supposed Zebrawood watch, made by Joycoast. Do you think this is genuine Zebrawood? Either way – it is definitely real wood, lightweight, and unique.

Looks genuine to me.

Im wondering if anyone has advice for repairing or restoring zebrawood with water damage. Love this table, but over time and a recent leak has been damaged. Hoping it can be repaired 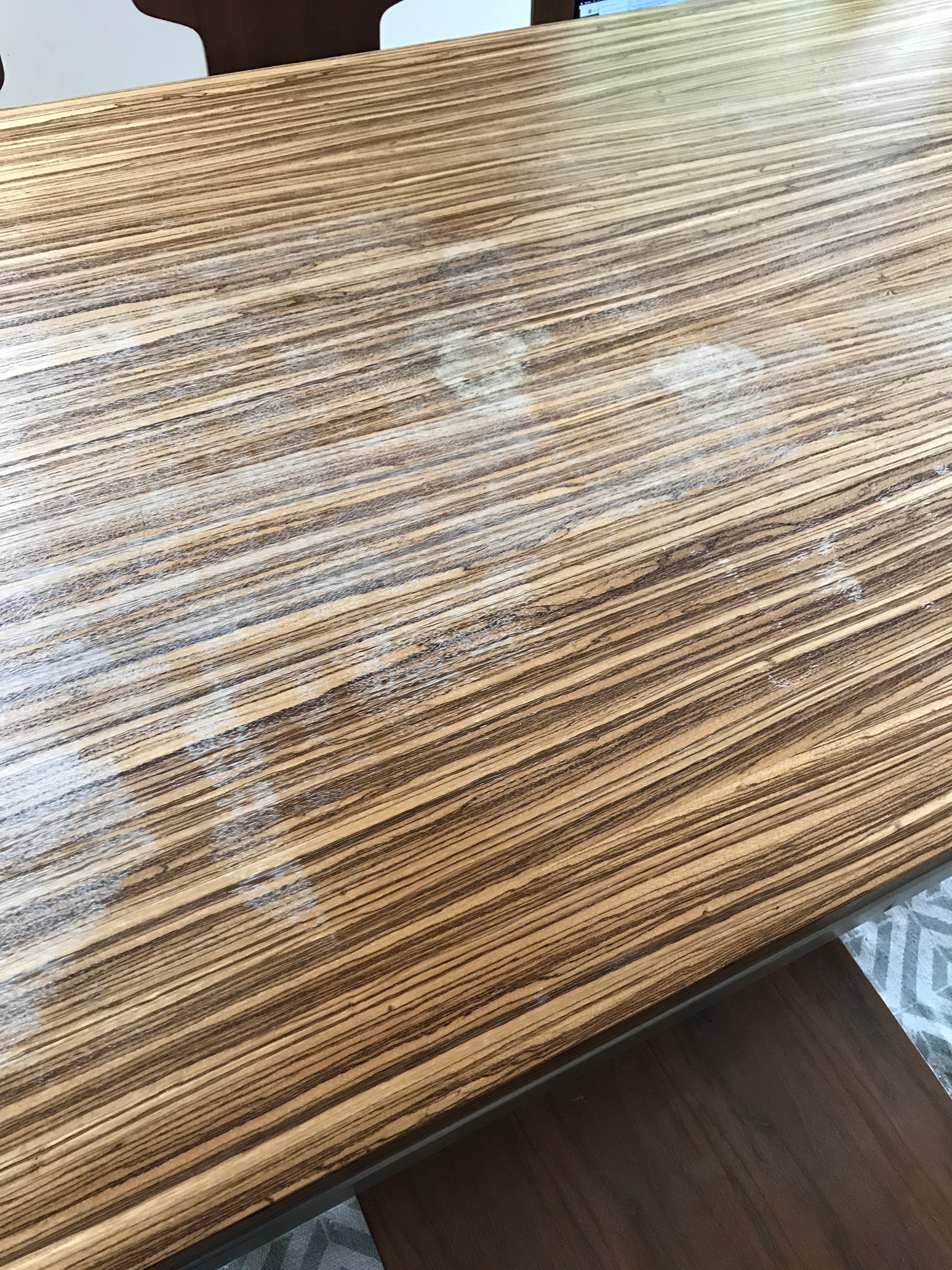 It looks like the damage is, for the most part, only “skin deep” — meaning that the discoloration is occurring in the layer of finish on top of the wood, and not in the wood itself. It looks extensive enough that it’d be best to just strip/sand the finish completely off and refinish it. The quality of the finished product will be determined by your skill in wood finishing. Also, if it is veneer and not solid wood, you should be extremely careful not to sand through the layer of veneer, which would basically be irreparable (short of re-veneering the… Read more »

Thanks for that analysis and explanation. I believe it is veneer so I think I will follow my gut and get a professional involved :)

Front & Back of REAL Zebrawood SG Style (With matching pickguard from the area on the plank no less, matches pattern.)made for me by a Chinese Company i Don’t know if I can mention them or not… I’ll place the bridge myself. It’s unfinished… I’ll sand & seal it, toss in 3HHH 4DPDT & a 6way switch… then i’ll turn it up to 11.

If the term “Zebrawood” is used in the absolutely loosest sense — meaning wood that has zebra-like stripes — then yes, that could be called “Zebrawood.” But I’m about 99% sure that that guitar is NOT the Zebrawood that is being referred to on this page, Microberlinia brazzavillensis. Besides the color and pattern being off, true Zebrawood in the Microberlinia genus has large open pores that are quite noticeable and give it a unique texture. Even if the pores have been filled, a transparent pore filler would have to be used because of the two-toned nature of the wood, and… Read more »

The pores were very pronounced upon cleaning. We were talking about filling and what-knot….
I suppose I should tell people “It’s made of ‘Not Zebrawood’…”
Yea. …that will sell really well….
Especially when they ask “How knotty is it, duh-huh…”
I’ll send them this way for further explaination.

I would bet my entire wood stash… That is not “real” zeberawood. I have handled thousands of board feet of the stuff. That is defiantly some kind of dyed laminated man made product. Probably made from layers of birch or something similar.

Wouldn’t birch laminate be significantly heavier? These bodies are comparable in weight to ash and alder. And zebrano is less expensive than sitka spruce and wenge and mahogany. And mahogany is standard even in cheap Chinese Epiphones. I don’t see why the assumption would be that this is NOT zebra wood. Especially since this is China we’re talking about. China doesn’t care what you import and they don’t care about sustainable forestry. And they pay lumberjacks less than $10 a day.

Can anyone identify this wood type? I was told it was zebrawood but its clearly not. Orange stripes on dark dense wood. Cheers

Possibly Macassar Ebony? That almost looks too perfect to the point that it looks borderline fake! Is there a glue joint in the middle?

Hi I think your right ,some type of fake plastic -acrylic maybe. I was told it was real wood. One piece no joint

Well, you could try sanding inside one of those cavities and probably tell if it’s real sawdust, or just plastic…

I just did sand in a spot and its definitly real wood. Im getting wood dust for sure. Does Not have the dog smell of zebrawood tho. Very cool wood!

You, sir, have a member of the brachystecia family. Which one in particular, I can’t tell without a better res picture. I’m inclined to say zebrano (which, contrary to what this site says, is not the same wood even though it is routinely marketed as zebrawood), but I can’t be certain.

It’s a fine piece, whatever type it is. You’ve got quite the find.

The term zebra wood has been used for three different species. Check on wikipidia

My custom made Zebra wood horse bow from Attila’s Archery.

I just found some zebra wood scales in an old box and it has a slight bow in it. What is the best way to straighten the scales before I start my next knife

Just used some of this for a knife project…sands well and I don’t mind the open pores. Coated with wipe-on poly:

I am also using zebrawood scales for a knife handle. Now that I see yours, I will have to be patient and do it right. I do not want to rush and ruin it. Did you use linseed oil on it? I sometimes use a clear acrylic on handles, but for this blade linseed oil may be what I will use.

I used Minwax Wipe-on Poly in clear satin. Just wiped it on about 10+times, (not really paying attention to the directions) every couple hours if it seemed dry enough. Used a cotton swab for the nooks and crannies, and just kept the rag in a ziploc bag. Worked out really well, although I’m sure you could use linseed or tung oil. I just wanted a little more water resistance, and the poly goes on in such thin coats it really brings out the wood grain. Good luck with your knife project!

I make handcrafted cajons. The look of this wood gives a great contrast
to a lot of other woods. I like to use this wood for the head of the
drum. The head of these drums are planed down to 1/8″ thick. It does
tear out badly! Usually at the ends. I have also made a full body cajon
of this wood. The sound quality of this drum is amazing. I really like
this wood.

Can someone help me, I am looking for a good wood filler for Zebra Wood.
I enjoy making things from this lumber, but find that after much time
of sanding the end grain holds a pore finish, any brand or store that
sells wood filler and finish for Zebra Wood be great thanks

Chris, I’ve used CA glue as a pore filler on small pieces of Zebrawood in the past. The problem is that by its very nature the wood is two distinct tones, so the filler would have to be transparent, thus ruling out most commercial pore fillers.

I make handcrafted cajons. The look of this wood gives a great contrast to a lot of other woods. I like to use this wood for the head of the drum. The head of these drums are planed down to 1/8″ thick. It does tear out badly! Usually at the ends. I have also made a full body cajon of this wood. The sound quality of this drum is amazing. I really like this wood.

Zebrawood is dense, hard, and beautiful. It doesn’t need to be heavily finished for the grain to dazzle. I have made few things with it, but nothing too great. I do have a friend who has been making wood sunglasses out of zebrawood for sometime now. He says it is the perfect wood because it is so hard… he’s been trying to get me to buy a pair from him https://www.hatcheteyewear.com

Recently built a table with zebrawood inlay. This required a large amount of sanding. Halfway through I developed a severe hayfever like allergy and could not wor for 2 days despite wearing a dusk mask.

Built a 63 foot bar top for a restaurant in Madison WI out of Zebrawood. Throughout the process of sanding, cutting, etc… a lot of people around the bar top had bad allergic reactions to the dust and shavings. I was sick for a week

Can someone help me, I am looking for a good wood filler for Zebra Wood. I enjoy making things from this lumber, but find that after much time of sanding the end grain holds a pore finish, any brand or store that sells wood filler and finish for Zebra Wood be great thanks
Chris

Well, I am certainly no expert of African geography, but according to most sources I’ve read it appears that Zebrawood (aka Zebrano) is indeed found in Cameroon, and is called there by the name: “Allen ele”.

The only other information I could gather about its whereabouts is this: “gregarious, sometimes in pure stands along riverbanks” according to Martin Chudnoff’s book, “Tropical Timbers of the World.”

Hi sir ,
i wish just to know if the wood zebrano is found in cameroon . if possible where in cameroon in which part o the country.
thanks

Well, I am certainly no expert of African geography, but according to most sources I’ve read it appears that Zebrawood (aka Zebrano) is indeed found in Cameroon, and is called there by the name: “Allen ele”.

The only other information I could gather about its whereabouts is this: “gregarious, sometimes in pure stands along riverbanks” according to Martin Chudnoff’s book, “Tropical Timbers of the World.”