Color/Appearance: Has a yellowish brown body with dramatic dark brown to almost black stripes. Color tends to darken with age. Also, the grain patterning can be quite striking, particularly on flatsawn areas. It’s not uncommon to see many “eyes” and other figuring in Bocote: though unlike knots, they do not seem to present any special challenges in machining.

Grain/Texture: Grain on most decorative pieces is usually figured in some way, and also tends to be interlocked, though pieces with plain and straight grain can also be found. Medium uniform texture and a naturally oily/waxy feel. Good natural luster.

Rot Resistance: Heartwood is rated from moderately durable to very durable depending on the species; it is susceptible to insect attack.

Workability: Some species may contain silica that will dull cutters. On the whole, Bocote is easily worked and machined with good results. Although Bocote has a fairly high amount of natural oils present, gluing is usually problem-free. (See the article on gluing oily tropical hardwoods for more information.) Bocote also turns and finishes well.

Odor: Bocote has a moderate scent when being worked that resembles dill pickles.

Allergies/Toxicity: Bocote has been shown to cause cross reactions once an allergic sensitivity to certain woods has been developed. Woods that can cause initial sensitivity include:  Pau Ferro, Macassar Ebony, Cocobolo, and most Rosewoods. See the articles Wood Allergies and Toxicity and Wood Dust Safety for more information.

Pricing/Availability: Likely to be somewhat expensive, close to other mid-to-high priced exotic hardwoods.

Comments: With its striking, zebra-like contrasts, and bold figuring, Bocote can be a very eye-catching wood. Bookmatching two consecutive panels can create symmetrical “faces” and other patterns in the wood, (though a relatively thin-kerf blade should be used to minimize the shift of the pattern). Bocote is generally used for its aesthetic attributes, rather than its mechanical ones—and although Bocote is by no means weak, its strength-to-weight ratio is below average. (It is roughly as stiff and strong as Hard Maple, even though Bocote is considerably heavier.)

I am looking at using Bocote in making a Maloof inspired rocking chair. Concerned about the strength and grain at the rear and front legs. Any thoughts on using Bocote for a chair?
Thanks
M.C.

Bocote has become my favorite for custom knife handles. Love it!

I loved working it for a guitar. Resawed and planed without issue. Hard and dense but worked well with both power and hand tools. Glued without problem, bent surprisingly well – even on the tight cutaway. Looks great under French polish. I somehow didn’t realize until now that it is the same family as Ziricote, a highly sought after guitar wood.

Bocote is awesome for handles, and even looks fine unfinished; as with this small toothpick holder.

Is there a toxicity to be aware of using this as the pot/bowl in tobacco pipes?

Eric, hi!
Is it true that another name for Bocote is Spanish elm? Is this the name of the tree in the United States?
Also, isn’t this Cordia gerascanthus? You write – Cordia spp.
https://tropical.theferns.info/viewtropical.php?id=Cordia%20gerascanthus

When it comes to common names used in commercial settings, I can really only give my direct experience based on the American market. Bocote is the common name used, I’ve never seen anything called Spanish elm for sale. The species most commonly associated with bocote is Cordia elaeagnoides, though I’m sure that other species are also included as well. In my opinion, what makes Cordia species worthy of the desirable trade name bocote (at least from an American perspective) is the interesting grain patterns. I’ve seen some wildly figured pieces, and they sold quickly. At the same time, I’ve seen… Read more »

I used bocote for dampers on the hammered dulcimer.The pinblocks are lacewood. I guess I can expect the bocote to darken, but hopefully not loose the stripes. This particular lacewood will become more orange brown with time.

Just used a small block of this wood to make some 1911 pistol grips. The grain looked so nice and turned out so good looking I left it sanded at 200 grit and finished it without any checkering. I’ll probably make all my high end gun stocks out of this now since it’s easy to work with and still being a strong wood.

Do you have any pics? Would be interesting to see.

I used Bicote for knife scales and the blade turned out amazing. Very striking figure and wonderful contrast between the grain. Easy to shape and doesn’t crack easily when drilled.

I just picked up some Bocote to rehandle a chef’s knife. I also grabbed a Bocote 1/8 x 3 x 24 to make a matching saya (sheath). Hoping it turns out as good as yours. Best, Fran

Would this be a good wood for a cutting board? Thanks

It is a hardwood, so yes. However make sure the stock is well cured as it is a very oily wood and if green it can resist gluing.

I originally worked on this wood without checking this data base and I made a beautiful mechanical pencil out of it but I found it weird how when turning the wood I smelled a strong pickle smell funny to see that is common. Hear is the pencil next to a cocobolo pen a blood wood pen and a leopard wood pen

Anyway, I’ve got a few 2-3″ spheres of what I’m fairly certain is Bocote. However, they immediately sink when placed in water. Does that mean they are not Bocote?

Sorry I missed this the first time around. They certainly do look like Bocote. Do you know the relative humidity in your house? My guess it’s just slightly heavier than usual.

Those look a lot like Ipe to me, especially the close-up of the end-grain. Ipe usually has a density greater than 1 (so heavier than water). The Ipe that I’ve used doesn’t quite have as striking contrast between light and dark, though.

This wood is “Bocote” Common Name(s): Bocote
Scientific Name: Cordia spp. I would like to know In scientific name “spp.” what does it mean?
Thank you.

This should answer your question: https://www.wood-database.com/wood-articles/scientific-name/

Just means there are more than one species in the genus. Cordia is the genus.

Bocote is one of my favorite hardwoods. 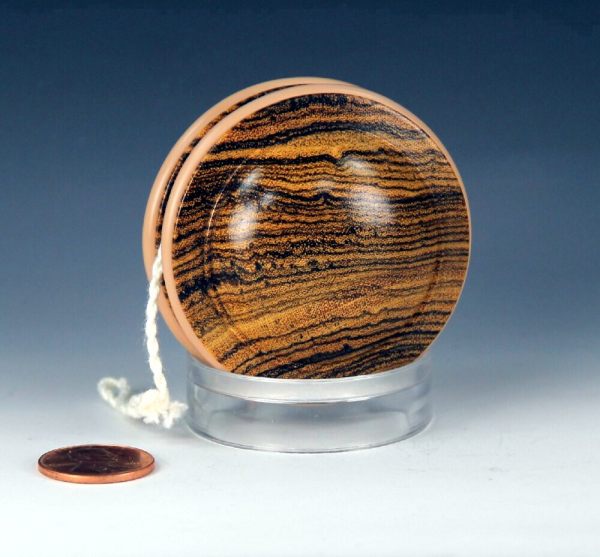 I’ve yet to see a piece of Bocote that I could say was plain or ugly, or, just plain ugly.
It’s all beautiful.

Very lucky to have one of those, being in the uk it would be pointless for me getting one but I want one.

This species made some of my most beautiful taphandles . The “eyes” in the wood is one of a kind! The Waterlox finish worked wonderfully. More at https://www.halfyankeeworkshop.com

Phil
Reply to  Half Yankee Workshop

Have you ever received a reply ?

I used Waterlox and did not have any problems. It does take about 4 days to cure completely.

I have used Walrus Oil Furniture Finish. Only let soak for about 15 minutes and then wipe dry. I have had outstanding results using this method.

Made a cribbage board out of white oak. Used Bacote for the bottom as
well as end trim on the game board. Stained the oak golden oak and it
looks really great. Great grain swirls and eyes in the Bacote.

My favorite wood species… when I can afford it. Use it on occasion in my woodworking business… Little Lumber Company, LLC.

Made a cribbage board out of white oak. Used Bacote for the bottom as well as end trim on the game board. Stained the oak golden oak and it looks really great. Great grain swirls and eyes in the Bacote.

My favorite wood species… when I can afford it. Use it on occasion in my woodworking business… Little Lumber Company, LLC.

just finished turning a pen and a pencil, easy wood to work with. beatiful grain patterns. LOVE IT!!

I took some fine chips of bocote and boiled them in hot water, smells alot like pickles.

Bocote makes a beautiful pistol grip, I have a set on order and can’t wait to see the finished project.