Color/Appearance: Heartwood color can range from a pale yellowish olive, to a deeper forest green or dark brown to almost black. The color tends to darken with age, especially upon exposure to light (see light-change color photo below). Pale yellow sapwood is clearly demarcated from heartwood. Quartersawn grain has a unique feathered pattern when viewed up close.

Rot Resistance: Verawood is reported to be very durable for outdoor use and is said to last almost indefinitely in direct ground contact; Verawood is  also resistant to insect attack.

Workability: Verawood has a tendency to skip over-top jointer cutters on account of its extremely high density, and very light passes are recommended. Verawood will also dull cutters, and overall it’s considered quite difficult to work. Also, due to its high oil content and hardness, it is very difficult to get a strong and reliable glue joint. However, Verawood is an exceptional wood for turning on the lathe, and finishes well.

Odor: Verawood has a distinct, perfume-like fragrance that lingers even after it has been machined.

Pricing/Availability: Should be priced in the mid to upper range of imported exotic woods. Turning blanks and other small pieces are most commonly available, comparing similarly with other tropical hardwoods such as Cocobolo or Bocote. Larger pieces of lumber are less common but are also available.

Sustainability: This wood species is in CITES Appendix II, and is on the IUCN Red List as conservation dependent. Cessation of any current conservation programs would likely result in a vulnerable or endangered status.

Comments: Verawood has very similar appearances and working characteristics to Lignum Vitae, and is sometimes referred to as Argentine Lignum Vitae. Technically Verawood is Bulnesia arborea, and Argentine Lignum Vitae is Bulnesia sarmientoi; though the two woods are so close in appearance and working characteristics that they have been combined on one page for simplicity’s sake. All the scans listed here are from Bulnesia sarmientoi. Though Verawood is in a different Genus than Lignum Vitae, (Bulnesia and Guaiacum, respectively) both genera are biologically classified in the same Family: Zygophyllaceae. Both woods are extremely hard, heavy, oily, and have a feathered grain pattern with a distinct brownish olive color.

Scans/Pictures: You can see from the picture(s) in the lower right that the wood is capable of turning a deep, almost forest green. Since there was a sticker above the area with the much lighter yellowish-olive color, it would stand to reason that this dark green color change came about through exposure to light.

A special thanks to Steve Earis for providing turned photo of this wood species. You can see more of his work at Steve’s Wooden Skittle Pins and Balls.

Hi, was wondering if this might be verawood. It’s very dense and heavy. Came from a mixed lot of hardwood. I can see faint traces of green in it. It’s at least 20 year old lumber.

I was wondering if this is verwood. It is extremely hard. A neighbor who was a woodworker died and kids threw it out a large 3x3x4ft piece. I used my bandsaw to make some t track clamps.

Would verawood be used in a laminate/veneer in the 1930s or 40s? I was sanding a sapele/mahogany veneer, apparently went too deep, hit a distinct green and yellow cross grain. Was surprised and bummed, but also curious how it might pull if I leave the wear and urethane as is?

I highly doubt it’s verawood underneath. With a greenish grain I would suspect yellow poplar.

I agree with Eric – it will most likely be poplar. Poplar is a very popular wood base for veneered furniture, or for parts that are hidden from view.

End-grain view of a Verawood yo-yo. Easy to turn and finish. Smells good too.

Found this piece at a thrift store and starting sanding it to reveal this beautiful green colored wood!! One side is green and the other side is normal wood hue. Can you identify this?

I am refinishing a little vanity that came from my great Grandmothers place originally. As I stripped off the years of accumulated stains and varnish I was delighted to find initials carved into the surface of a couple of the drawers and the top surface belonging to my long gone Great Uncle. The next surprise is this small section that has a greenish hue totally different from the rest of the piece. Can you identify what type it is?

It’s hard to say for sure without a look a the endgrain. I would say, unless you are located somewhere in South America, it’s almost certainly not verawood. In the eastern US, yellow poplar is a hardwood that’s used in furniture that can have a greenish hue.

Hello! Thoughts on this bowl? Based off the thumbnails, argebtine lignum vitae is the closest I found to a match

Any harm with this being a kitchen utensil handle that will get washed?

Should be fine as long as it’s not put in the dishwasher.

With this wood are also made wristwatches such as this photo, the Italian brand Woodstar Milano. https://woodstar.it 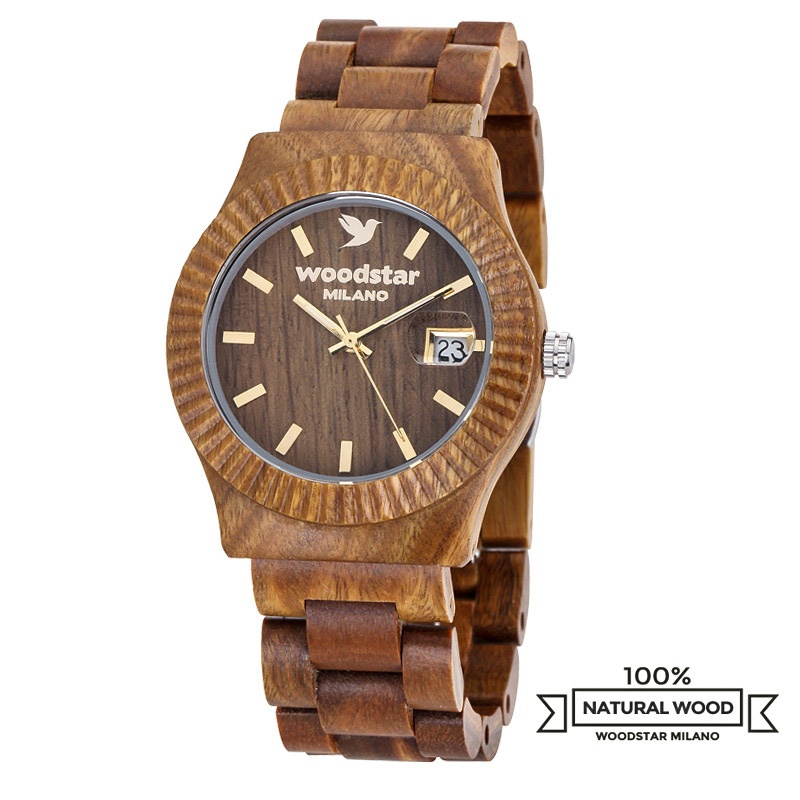 Verawood is a beauitful green wood. HOWEVER, there is something that I had to learn the hard way, since I did not read this testimony from anyone: While Verawood often times change colors for the better, it is highly susceptible to heat. Once exposed to too high of a temperature (80 degrees F), the wood changes color NOT for the better: it has a bad habit of reverting back to its original Olive-Hazelnut color. Keep it away from heat, if you want to keep its green!!

Now that you mention it, I’ve experienced the exact same thing. I left a piece in a hot car once with the windows up, and when I got back there were these tiny bubbles on the surface, and the color has seemed to be stuck at a brownish olive, much more on the side of brown.

Can confirm as well, I have a watch made out of verawood and has turned more brown than green after wearing it to my outdoor job here in FL.

It still looks great and smells amazing though.

There are two species of “lignum vitae” . One is Bulnesia arborea from Brasil and Colombia also known as verawood or maracaibo,the other more fragrant from Paraguay is Bulnesia
sarmientoi or Palosanto. These are two different species and this article is actually not correct.

Did you read the comments section? Pretty much says exactly what you just said.

I turned a piece of this to make a handle for a pizza cutter kit that I bought. It does clog sanding belts but a rubberized belt cleaner will renew the sanding belt. I finished it with a tung oil mix.

I love the smell of this wood, though it clogs power belt sanders

A neighbor gave me a slab of “Teak” that he used to make some replacement board for his boat long ago. He no longer owns the boat, but he enjoyed it very much. The “teak” is actually Argentine Lignum Vitae Somewhere I recall that Tung Oil is a good finish material for this type of wood. I used a 50/50 mix of tung oil and mineral spirits (so the oil would go farther into the grain). Attached is a photo, however the true color is more green. I believe the red below the bowl resulted in a warmer result. Thanks… Read more »

This is being sold under the name of ‘Green Sandalwood’ because of its rich aroma which makes it good for prayer beads too.

I am not sure how long it takes to change color. I understand that most woods change color from one of two exposures:
Exposure to UV Light (the sun)
Exposure to Oxygen
I would think that a UV blocking finish (sometimes used to treat wood decks) may delay the change. I don’t think you can ever stop the oxygen exposure unless it is cast in resin.

Sorry that I can not help you any more than this. I believe the wood that I got from my neighbor was at least 5 – 10 years old.

i was working on a handle and when i sanded it around a month ago, it came up a warm caramel brown, but then i let it sit, indoors exposed but out of the sun, and its since turned an obvious darker green.

The deep jungle greens in this wood seem to be entirely based on the oils that cover the surface. I experimented a little bit and found that hanging a work-piece between two high powered lamps gives you a color change over night. I tried a few sealants and found that solvent based was the worst for preserving the color, oil based is somewhere in the middle and water-based polycrylic seems to preserve it the best of the ones I tried. It seems like the more the sealant interacts with the oil on the surface the duller the color gets.

I am about to enter into a relationship with verawood as a pen turner. I would like to know if the colour change still happens after the pen has been treated with French polish and wax. If so, approximately how long does it take?

A neighbor gave me a slab of “Teak” that he used to make some replacement board for his boat long ago. He no longer owns the boat, but he enjoyed it very much. The “teak” is actually Argentine Lignum Vitae Somewhere I recall that Tung Oil is a good finish material for this type of wood. I used a 50/50 mix of tung oil and mineral spirits (so the oil would go farther into the grain). Attached is a photo, however the true color is more green. I beleive the red below the bowl resulted in a warmer result. Thanks… Read more »

I started sneezing within a minute of beginning to sand some verawood. I went ahead and continued, using planes instead… after a while my eyes, sinuses and the skin on my upper cheeks all were burning. It also left a hard crust on the edges of tools, rather like surface rust – not waxy but dry, brittle crust quite stuck to the tool edge, needs scraping off very often.

That said, it is beautiful, hard wood. The herringbone grain is fantastic.

Hi,
Very nice site in deed.
I like the structure and the layout.
Plain information, fast, easy.

Maybe worth adding that name.