Amidst the daunting jungle of hardwood species, (where there are several hundred commercial species used worldwide, with many thousands more that are intermittently seen in woodworking applications), the world of conifers is much more limited. With perhaps only a few dozen chief species worldwide, and only a few hundred species (rather than thousands) that are ever harvested for wood, softwoods represent a comparatively smaller percentage of the diversity seen in wood.

However, softwoods are also much simpler than hardwoods in their anatomical features, so there are far fewer clues to help identify them. Consequently, macroscopic softwood identification is usually less conclusive, and many times will only result in more broad or generic identifications, such as, pine (Pinus spp.) or spruce (Picea spp.), rather than determining an exact species.

The primary distinguishing feature between softwoods and hardwoods is that softwood species lack pores. So upon initial examination of an unknown wood sample, the most immediate detail to note is whether or not the endgrain section has numerous circular openings—commonly referred to as vessels or pores.

Resin canals, sometimes referred to as resin ducts, are unique to conifers; they are technically not individual cells, but are actually open, tube-like spaces bordered by special cells that have the ability to secrete pitch or resin into the neighboring opening (canal). One of the apparent purposes of these ducts is to protect and seal up a wound by exuding resin to cover the damaged area of the tree. (Accordingly, in rare instances, some softwood species that don’t normally have resin ducts will develop them as a result of trauma.) When initially sorting between softwoods, three primary groups emerge when considering their resin canals:

This group includes all of the true pines in the Pinus genus.

Some genera in the Pinaceae family, such as: spruce (Picea spp.), larch (Larix spp.), and Douglas-Fir (Pseudotsuga spp.)

Resin canals can be very infrequent in some softwood species, so care must be taken to observe an adequately large area of the endgrain to ensure their absence. One way to confirm the presence of resin canals is to look for a type of horizontal resin canal, called a fusiform ray. When viewed from the endgrain, fusiform rays are seen as unusually wide rays, and can be thought of as a hybrid between a resin canal and a ray. (See the picture of Sitka Spruce above for an example of fusiform rays.)

Once a softwood sample has been sorted into one of the three initial categories based upon the resin canals, further refinements are used to obtain a more specific and positive identification. The following is an overview of the remaining features that are used to describe and identify conifers; each softwood species’ profile page also lists these characteristics to help in identification.

Within a conifer’s trunk, the majority of the wood is comprised of long, thin cells called tracheids. In addition to giving the tree most of its strength, tracheids also double as “pores” in a sense—since conifers lack true pores, they rely on tracheids for sap conduction.

Tracheids are arranged in orderly, neat rows within the trunk, and are longitudinal (they run lengthwise with the trunk). Tracheids can vary in diameter depending on the species, and because they account for over 90% of the cells, their diameter greatly influences the overall texture and feel of the wood—the larger the diameter, the coarser the texture.

Because anatomical features such as tracheids are very difficult to accurately measure without specialized tools, their diameter will instead be referred to in comparative terms, such as small, medium, and large. When viewing the endgrain under 10x magnification, softwood species with the largest tracheids generally have cells that can each be seen individually. Single cells become harder to discern in the mid-range, while the smallest tracheids tend to appear only as a collective mass with no clear cell borders.

[Click each picture to get an enlargement with a clearer view of the tracheids] At left is cypress (Taxodium distichum) with very large tracheids, especially among its earlywood. In the center is balsam fir (Abies balsamea) with an intermediate texture. At right is northern white cedar (Thuja occidentalis) with very small diameter tracheids that generally can’t be discerned individually.

The earlywood of a tree consists of faster-growing material, while the latewood is comprised of denser, slower-growing material. In softwoods, this translates into larger diameter tracheids in the earlywood, and smaller diameter tracheids in the latewood. In addition to simply noting the overall average size of the tracheids, it can also be helpful to note the rate of transition from the earlywood to the latewood. This transition can be described as being either very gradual, or very abrupt, or somewhere in between, such as moderately abrupt. Although this visual description is somewhat subjective, such observations can help give clues and point an otherwise ambiguous identification into one direction or another.

One caveat in examining the transition rate of the tracheids is that growth rates should also be considered. For instance, if a wood sample has an abnormally fast growth rate, the earlywood and latewood zones will be elongated, giving an artificially lower impression of a more gradual transition. Likewise, if a wood sample is encountered that is suspected to have an unusually slow growth rate, then the growth zones will be compressed, and the transition between earlywood and latewood will seem more abrupt.

It should be noted that grain contrast and earlywood to latewood transitions ought to be considered each separately. Although it would seem apparent that wood with an abrupt transition from earlywood to latewood would also have an uneven grain appearance, it’s important to remember that just because the change in tracheid diameter is abrupt doesn’t necessarily mean that there will be an accompanying change in color—some woods have abrupt transitions, and relatively even grain colors.

Much like tracheids, parenchyma are oriented along the length of the tree-trunk, and are sometimes referred to as longitudinal or axial parenchyma. In softwoods, these parenchyma cells are roughly the same diameter as tracheids when viewed from the endgrain.

Because tracheids account for over 90% of a softwood’s cells, parenchyma cells are comparatively sparse—(many softwoods don’t have any parenchyma at all, such as: pine, spruce, and yew).

Commonly, single cells that are scattered throughout the cell structure of the wood can’t be individually discerned, but since parenchyma are often filled with darker-colored contents (usually amber or reddish-brown), these special cells can sometimes be spotted with just 10x magnification.

In macroscopic examination of a conifer’s parenchyma, two different formations are typically encountered. The first is when parenchyma is simply scattered throughout the cell structure of the wood in little to no apparent order, which is called diffuse parenchyma. The second is when the cells are arranged in a ring or line that runs parallel to the growth rings, which is frequently called zonate parenchyma.

With the exception of special fusiform rays, which occur in conjunction with resin canals, regular softwood rays are usually only one to two cells wide (called uniseriate and biseriate, respectively). Because these normal rays are much narrower, and lack unique characteristics that are observable with a 10x hand lens, their usefulness in identification is essentially limited to microscopic examination. In hardwood identification, rays can offer helpful clues in determining a wood species at only 10x magnification. However, with the scope of this website being limited to macroscopic identification up to only 10x, the minute differences encountered in the narrower rays of the softwood species will not be considered.

Get the hard copy 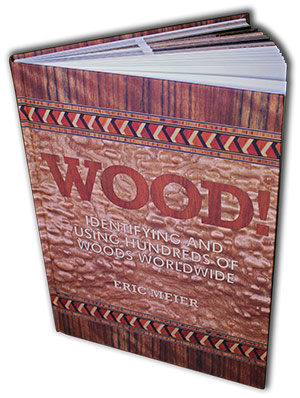 I’m looking the comparison of softwood based on the fire characteristics. Can you assist me?

Please please help us understand by putting red arrows to help is identify the actual places in the photos that you are identifying.
To us novice wood lovers it would be a great help to let us identify just were in th photo to look for the formations you describe.

Hopefully people can help me to identify this pine..?? Thank you..

So glad this was asked somewhere, I am curious as the most resinous pines too.

Longleaf heartwood, usually called “heart pine” is so resinous that it gums up sandpaper. It was once used for factories and heavy construction and exported to England during the industrial revolution. It also was a source of naval stores–turpentine, pine tar, etc. The longleaf pine (pinups palustris) once formed a massive monoculture forest of huge straight slow growth tress across the Southeast. Less than 3 percent remains today. Pines of most if not all species can form heartwood which will contain more resin than sapwood, though larch species (genus larix) may be more resinous than pine and is the source… Read more »